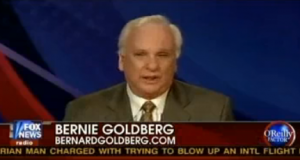 Tonight on The Factor, Bill O’Reilly and Bernie Goldberg used Goldberg’s segment to discuss a number of topics relating to the proposed Islamic community center and the (liberal) media’s relation to it. The jumping off point was the revelation in the New York Post that Faiz Khan, an associate of Imam Rauf’s is a 9/11 Truther, something that O’Reilly likened to President Obama’s connection to Jeremiah Wright. O’Reilly and Goldberg took guesses as to whether the evil Mainstream Media would cover it and then continued from there until Goldberg gave a lengthy explanation as to why he thinks liberals like the mosque.

The moment came when O’Reilly asked Goldberg why the left-wing media wanted the mosque to be built. Goldberg’s answer basically worked as his summary of all liberals anywhere:

“I think it’s because one of the most fundamental delusions of liberalism- whether it’s the people in the media or out of the media because there’s no difference. Liberals in the media are the same as liberals outside of the media. One of their fundamental delusions is that they have a monopoly on compassion and taking this side of this issue enables them to show how compassionate they are because they are sticking up for ‘oppressed’ – and I am putting that word in gigantic quotation marks – American Muslims. It makes them feel, once again, that they are looking out for the underdogs. And all of this, whether it’s Affirmative Action or a dozen other issues, mostly makes them feel better about themselves. And the icing on the cake is that many prominent conservatives are against the mosque in that location. And now they can say, ‘You see? We’re the good ones. We’re always the good ones, y’know. And they’re the haters and the bigots and the ignorant people.”

Helpful tip, change a few words in that quote and it works as a perfect argument for why you should never want to help anyone ever.

It was an interesting conversation and O’Reilly made sure to warn the MSM that tomorrow’s show will feature a rundown of who covers the Khan story and who doesn’t. I guess we’ll have to wait to find out the results.