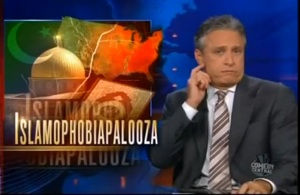 On the day that a glowing magazine profile on Jon Stewart came out, The Daily Show host did not disappoint the presumed handful of New York readers who tuned in last night having just learned about the late night news-comedy host. Last night’s opening topic? “Islamophobiapalooza!” — a theme that Stewart used to connect the media firestorm over Rev. Terry Jones and Imam Rauf‘s comments to the very “threats” alleged to have been made by Dick Cheney, Mitt Romney and Rudy Giuliani in past presidential elections.

The following segment opens with numerous examples of the news media reporting on the Florida minister (and his now notorious “Burn a Koran Day” publicity stunt) and the media hand wringing over its own coverage. The highlight is MSNBC’s Cenk Uygur admonishing the media to ignore Jones, then instantly getting interrupted to cut to live coverage of Pastor Jones’ press event. Stewart compares the media to the dog on the movie Up! (“Squirrel!”) It’s funny because it’s true.

Stewart then brings his attention to Fox News’ own part in the alleged Islamophobic media spectacle by airing clips that focused on Imam Rauf and the Islamic community center planned for Lower Manhattan. Fox News appears quite comfortable calling it the “Ground Zero Mosque,” The Daily Show chooses the only slightly more hyperbolic “Community Center of Death.”

When Imam Rauf recently told CNN’s Soledad O’Brien that he feared moving the community center from its current location would send a dangerous message to radical extremists, many on Fox News openly questioned whether or not this constituted a threat to American security. To prove their point, Stewart then aired numerous clips of Cheney, Romney, and Giuliani effectively making similar remarks in past elections that claimed that voting for Democrats would embolden the very radical extremists referenced by Fox News.

As per usual, it’s a very funny, smart and super effective segment that highlights the many absurdities in recent media coverage of all things Islamic.