Bill Cosby Reacts To Trayvon Killing On CNN: ‘What Is Solved By Saying [Zimmerman] Is Racist?’
video

Bill Cosby Reacts To Trayvon Killing On CNN: ‘What Is Solved By Saying [Zimmerman] Is Racist?’ 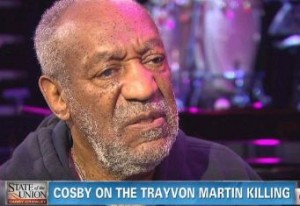 Actor and political activist Bill Cosby was on CNN’s State of the Union with Candy Crowley to discuss everything from the presidential election to the tragic shooting of Trayvon Martin. And on the subject of Martin’s death, Cosby did not think it was an issue of race so much as it was an issue of gun violence and a pattern of a certain kind of mentality he witnessed among gun owners that needs to be challenged head-on.

Crowley asked Cosby if he had any criticisms of President Obama. Cosby had some strong words, in fact, for people who actively go out of their way to undermine him by “saying things that they can’t prove,” and many of the people who were supposed to be working with him on important legislative issues are no longer doing that. He said Obama was just trying to do his job, but many people are just standing in his way, no matter what he does. Crowley asked if that isn’t just politics as usual. Cosby countered that the climate surrounding Obama is much worse. He predicted Obama would be much better in a second term in office.

Then Crowley shifted to the Trayvon Martin case to get Cosby’s take on the issues surrounding it. He focused on the one fact that George Zimmerman shot Trayvon to bring up what he perceives as an issue with gun ownership mentality.

“When a person has a gun, sometimes their mind clicks that this thing… it will win arguments and straighten people out. And then in the wrong hands, in the wrong mind, it’s death, it’s wounding people. People who don’t have money to buy a decent meal for themselves, yet someone will put an illegal gun in their hand? And we in this country have got to continue to be out there in the streets about the gun.”

He did add that people do have a right to own a gun in their home, as a society we need to be more careful with how we handle gun violence as an issue. Crowley asked Cosby if the killing was more an issue of gun violence than of race. Cosby thought some of the racial elements of the story were overplayed and don’t actually answer any real questions.

“What is solved by saying he’s a racist? That’s why he shot the boy. What solves that? This [the gun], and what is he doing with it, and who taught him and told him how to behave with this, it doesn’t make any difference whether he’s racist or not racist. If he’s scared to death, and not a racist, it’s still a confrontational provoking of something.”

Cosby recounted a story about when he got a gun to protect his family. And the mentality he had at the time was that in order to make sure his family was safe, if he saw a disturbance outside, he would have to show it he had a gun to scare it off. He ended up giving back the gun because he didn’t feel comfortable with it.