Bill Cunningham And Hannity Get In Shouting Match With Dem Guest: IRS Was Actively Working To Re-Elect Obama!
video

Bill Cunningham And Hannity Get In Shouting Match With Dem Guest: IRS Was Actively Working To Re-Elect Obama! 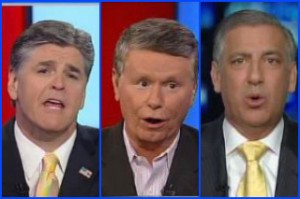 Sean Hannity and conservative panelist Bill Cunningham got into a shouting match tonight with Democrat Joe Trippi over just how incentivized the Obama administration was to crush Republicans in 2012. Cunningham claimed that the IRS targeting Tea Party groups halted their get out the vote efforts and giving Obama the advantage in states like Ohio, effectively making them working on behalf of Obama’s reelection campaign.

Hannity pointed out that the current acting head of the IRS was just that, an acting head, and therefore the resignation is purely symbolic. He said that the American people had a right to know about this before the 2012 election, with Cunningham saying that the White House resorted to “Chicago-style politics” after a crushing defeat in the 2010 midterms in order to do well in the next cycle. He claimed that the IRS was keeping Tea Party groups too busy to recruit millions more voters for Mitt Romney.

Cunningham declared that the IRS was in the business of “electing Obama,” and touted how even some liberals are piling on Obama for lying on Benghazi. Trippi hesitated to join that crowd, and said that unlike with the IRS and AP scandals, Benghazi has remained a highly partisan issue with Democrats giving it far less credence than the other scandals. Cunningham and Hannity agreed that all three scandals share the common themes of abuse of power and getting Obama reelected.

Trippi also denied Cunningham’s claim that Obama was worried about doing poorly in Ohio last November, but Cunningham and Hannity confronted him on whether this was remedied by suppressing the Tea Party vote. Hannity also claimed that today’s document dump on Benghazi was meant to distract from the other big scandals.