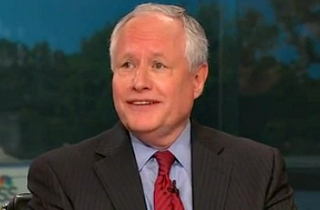 “[John Kerry] also made news,” Kristol said, “by giving Senators McCain and Graham, and people like me, who really want a more aggressive—who want Assad to go. The way to deter the future use of chemical weapons in Syria is to get rid of Assad, he’s the one guy who used them—but Senator [sic] Kerry gave a little bit of an opening to the hawks when he said the military option’s limited, it’s just to deter and punish the use of chemical weapons, but our political aim remains to get rid of Assad, and we will weaken Assad appreciably.”

“I do think there will be a way to reconcile the views of the hawks like Senators McCain and Graham, maybe give some of the doves in Congress a little bit of something in the authorization resolution, you know, saying no grounds troops, at least for now, perhaps we should try to end this pretty quickly,” Kristol said.

Kristol affirmed that the House of Representatives would pass the authorization, a prediction with which several GOP legislators had earlier disagreed.

“In this case, Republicans, and I would even think a majority of Republicans will end up voting to authorize the use of force,” he said.