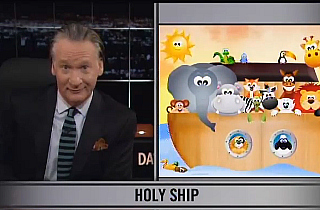 On Friday evening, Bill Maher‘s “New Rules” segment concluded with a lengthy tirade against the arbitrary rules and customs set forth in the Bible, as well as some of the more unbelievable details religious folks still believe to be literally true.

Maher began the monologue by declaring that America is “stupid” because 60 percent of the country reportedly believes the tale of Noah’s ark is literally true. He went on to slam the film Noah as “floating giraffe crap,” but said it “must be doing something right” since it’s been condemned by both Muslims and Christians. And the fact that it might lose a lot of studio money, he joked, “may put it in hot water with the Jews too.”

That gave way to a rant on how the world is now four centuries removed from the scientific revolution, and yet we still find the Noah’s ark story to be entirely true, despite some of the more… unbelievable… details. Christians are mad about the blockbuster film, he noted, because it doesn’t take the Bible literally enough. “They’re mad that this made-up story doesn’t stay true to their made-up story,” he quipped.

But, really, Maher said, Noah’s tale is an “immoral” one because it’s about a “psychotic mass murderer who gets away with it and his name is God.” The Earth’s creator became so irate that he had created mankind so flawed, as Maher related, that he sent a flood to kill everyone, including babies.

“What kind of tyrant kills everyone just to get back at the few he’s mad at? I mean, besides Chris Christie,” he jabbed.

“Isn’t life hard enough without making shit up out of thin air to fuck with yourself?” he later asked of religion’s arbitrary rules about food, clothing, and other material goods.

Watch the full segment below, via HBO: