Bill Maher Says He Doesn’t Think Obama Is A Christian 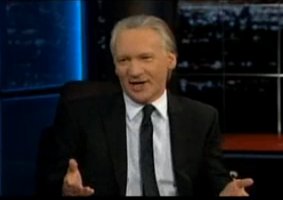 When someone says they don’t think President Barack Obama is actually a Christian, the expectation would be that they think he’s secretly a Muslim. Not Bill Maher. On tonight’s Real Time, in the process of arguing that Obama’s not really a centrist politically, Maher also revealed that he doesn’t think Obama’s actually Christian, either, but rather a secular humanist.

Guest Cornel West fervently disagreed with Maher on this point, saying Obama “changed his mind on the God question” and his religious beliefs are separate from his political career (many might dispute that, however). For the record, Maher also doesn’t believe Obama actually “struggle[s] with gay marriage,” as he professes to, but of course the religion issue was a hotter topic. Maher said he didn’t want to get into a religious discussion (because when you think of someone who’d shy away from a debate on religion, you definitely think of Bill Maher), but stuck to his guns – as did West, who confidently noted that “somebody is wrong about this.”

For the record, the belief Maher apparently holds – that Obama isn’t actually a Christian, but merely pretends to be one to keep up appearances for the sake of his political career – strikes us as one of the most cynical things anyone could possibly believe about Obama. Is it possible? Well, yes – it wouldn’t make Obama the first politician to not be entirely upfront about everything regarding his true self. But for Maher to hold the view that Obama’s not actually a Christian – a viewpoint, of course, fundamental to the “Obama’s a Muslim” school of thought Maher mocks in the very same segment you’ll see below – well, it’s a little curious. Here’s the video, via HBO.