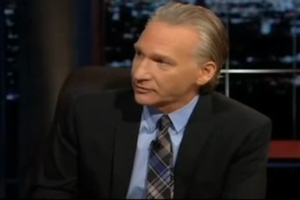 After having toned it down somewhat during the past few weeks against Tea Partiers and even inviting some of them on the show, Bill Maher came out swinging against the American right on his panel last night, equating all political violence with those on the right and conceding that, while not every Republican is violent, “whenever they are that, they’re on your team.”

The conversation sprung, of course, from the head-stomping incident last week in Kentucky, where a MoveOn.org activist was attacked after Rand Paul supporters assumed she had violent intentions. Maher phrased the question simply for his right-of-center guests, Fox News’ Margaret Hoover and National Review Online‘s Reihan Salam: why is it always your team?

Both objected, Hoover coming with with Joy Behar as a counter-example (to which third guest Lawrence O’Donnell scoffed, “oh, you know the audience of The View, so violent”) and asked, incredulously, whether he was arguing that “the truth [was] that only Republicans are the violent ones, the only ones that beat people up? Are you kidding me?” “I’m not kidding you,” Maher replied.

Salam challenged him strongly on that point, after Hoover mostly got him to admit that he believes Republicans and those associated with them are the ones inciting violence, asking, “you’re saying that we’re all bigots, homophobes, and we stomp on people’s heads?” “No,” Maher responded, “I’m not saying that at all. I’m saying that when they are that, they’re on your team.”

“All right-wingers are violent” and “all political violence comes from the right” are two very different arguments on a hard logic plane, but in the world of politics it’s difficult to find much of a difference. As mentioned before, Maher had behaved somewhat in the presence of political adversaries, so one must wonder whether the conversation would have gone somewhat differently had the SEIU-related attack on Kenneth Gladney which, in some right-wing circles, is the flagship example of modern left-wing violence, come up.

Video of the conversation via HBO