Bill Maher On Palin: “Anybody Could Be President In This Dumb F*ckin’ Country” 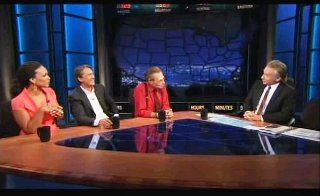 Sarah Palin took a little trip this past week, and just as it was a foregone conclusion Bill Maher would talk about Anthony Weiner’s penis, it was just as much of an ironclad guarantee that he’d address Palin’s tour of the Northeast. Especially intriguing to maher in his panel – how Palin happened to be in such close proximity to Mitt Romney when he announced his run for president, her jewelry choice, and her interpretation of Paul Revere.

After speculating on her New Hampshire location being so close to Romney’s and why she would wear a cross necklace one day and a Star of David necklace another (Maher wasn’t such a fan of the switch, but panelist Larry King was all for the Star of David). They all took the most interest, though, in her description of Paul Revere’s ride, which in her telling was about “warn[ing] the British that they weren’t going to be taking away our arms.”

Panelist Melissa Harris-Perry was especially in stitches over that one, but it soon turned into a more serious discussion of exactly what Palin is hoping to accomplish with the tour. Maher called it “an un-campaign,” a series of campaign stops made to look like they’re anything but, in order to avoid the appearance that she’s just trying to score political points. Harris-Perry saw it as the “reality TV version of a presidential campaign.” As for whether it will actually help her politically for a presidential run it’s uncertain she’ll even make, Maher came to a blunt conclusion:

“I think anybody could be president in this dumb fuckin’ country.”

Video below, via HBO.