Bill Maher Recaps The Highs, The Lows, And The Empty Chairs Of The 2012 Campaign 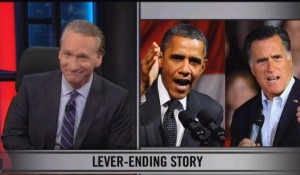 Bill Maher used his final pre-election day New Rule to give voters a look back on memory lane with the good, the bad, and the ugly of the 2012 presidential campaign. Maher first said that people should stop saying they can’t wait for the election to be over, because they secretly love campaigns like this, which he succinctly described as “an insult to our intelligence.”

Maher argued the 2012 campaign officially got started right after the Supreme Court ruled in the infamous Citizens United case, changing the entire dynamic for money in politics. Following that decision, Maher said the GOP tried looking for the “right vessel to carry their water” and were presented with a stage of “freaks, creeps, and twistos.” For, as Maher said, when historians look back on the 2012 race and wonder how the electorate got stuck with Mitt Romney, all they need do is see his primary challengers.

Following the primaries, Maher remarked that despite being the least logical choice for the Tea Party to support, Romney ended up being the nominee and chose as his running mate Paul Ryan, who bragged he “replaced the cheetah as the world’s fatest land mammal.” Maher contrasted the GOP’s convention, most notable for Clint Eastwood‘s one-man routine, with the more successful Democratic one, by the end of which the liberal crowd was chanting “four more years”… for Bill Clinton.

Of course, the bigger game-changer came during the first debate, which Obama “boycott[ed]” and was immediately caught off-guard by Romney’s “pivot to the center.” Maher said it was remarkable to see Romney suddenly take more centrist positions, wondering what would have happened “if he said those things during the primary debates.”

In the end, Maher concluded that the stakes for the country are very simple: