Bill Maher Savages Reagan: ‘The Original Teabagger,’ ‘Pitchman For Batsh*t’ Would Do Well In Modern GOP 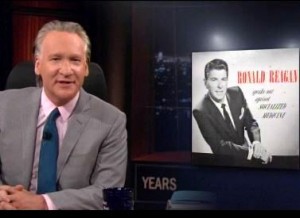 Bill Maher differed with a consensus found on both sides of the aisle that Ronald Reagan would not be welcomed in the modern Republican party, saying that actually, Reagan would be quite welcome in the 21st century GOP because he was the forebear of a lot of the tea party philosophy. Maher called Reagan the “original pitchman for batshit,” and proceeded to tear apart the idea that Reagan was a moderate who liberals like President Obama could publicly admire.

Maher acknowledged that Reagan “did a few things today’s GOP would not like,” but aside from that, he basically wrote the playbook for the modern Republican party. He said Reagan was very much in line with the tea party on racial issues, always talking about the hypothetical “Chicago Woman,” declaring, “Reagan just made shit up.”

Maher brought up a Reagan quote: “A tree’s a tree, how many more do you need to look at?” He called Reagan the “original pitchman for batshit” who spewed the same anti-socialist rhetoric that tea partiers do today. And “worst of all,” Maher said that Reagan “inspired a whole generation of people who hate government to get into government.”

However, while the Republican worship of Reagan is understandable (“they’re the religious party, worship is in their DNA”), Maher couldn’t understand what Obama talks about Reagan like he’s a “brother from another mother.” He said, “When you mainstream Reagan, the far right becomes the new middle,” and declared that both sides need to drop the Reagan worship once and for all.

“He was patient zero for everything you’re fighting against now. He was the original teabagger. Stop agreeing he was a saint, especially when his two miracles were turning water into polluted water and walking on the poor.”