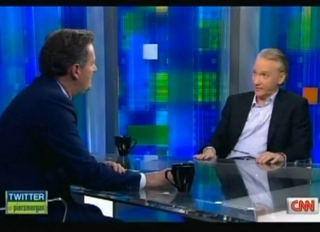 Bill Maher braved an hour with Piers Morgan tonight, fielding tough political questions that as host he can usually manage to avoid– questions like “who have you voted for?” and “is America less racist today?” He fielded them happily, though one appeared to give him a headache to think about: “if someone put a gun to your head, would you vote for Rep. Michele Bachmann or Sarah Palin?”

Morgan began the segment on that note, and while Maher emphasized that the choice was purely artificial and, in any real setting, impossible, he finally fessed up to preferring Rep. Bachmann. “At least she’s somebody who can read, she has a job, she was a lawyer, she’s in Congress,” he explained. “She’s not just someone who sits there and reads the prayers on her Blackberry.” That said, Maher noted that it was “absolutely” possible for either to win, and reverted to Ronald Reagan as proof of that. “The Bedtime for Bonzo guy?” he joked, noting that Rep. Bachmann and Palin had the advantage of entering the race “in a bad economy with a black president.” Morgan pushed him on that last comment, and Maher replied that he saw the country today as being “more sneakily racist,” but he respected the “old-school racists” more for being straightforward.

Morgan and Maher also had an extensive conversation on President George W. Bush (who Maher described as “my uncle who molested me and I blocked him out of my memory”) and President Barack Obama, who he painted in a light far more commonly used to refer to Bush: “he’s a president you can relate to– he’s intelligent.” That said, Maher was disappointed in Obama for his “centrist” policies and for “constantly voicing the Republican opinion.” “Democrats get in and we don’t attempt Democratic policies,” he argued, ultimately refusing any political title other than “practical” when asked on that front– “I hate stupidity and I hate stuff that doesn’t work.”