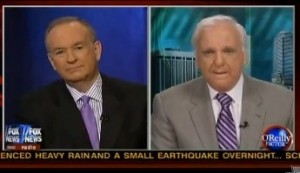 Bill O’Reilly and guest Bernie Goldberg shared an odd and self-congratulatory moment last night, that was extreme for even their standards. It was about the coining of the derisive term “lamestream media,” and O’Reilly told his guest that the phrase “is everywhere now, is it not?” Nodding, Goldberg cited Sarah Palin‘s use of the term, then strangely pointed to a Daily Show segment that made fun of those who use such a puerile term. It was a stunning bit of cable news puffery that was, for lack of a better term, pretty lame.

For context it helps to remember that Goldberg’s latest book is titled “A Slobbering Love Affair: The True (And Pathetic) Story of the Torrid Romance Between Barack Obama and the Mainstream Media” Goldberg deflected the praise right back at the host claiming that, had he coined that phrase on, say, CBS’ Evening News, it would never have “taken off” as it has.

Since when did getting cited by Sarah Palin and being made fun of on The Daily Show comprise a trend? The truth is, they are probably right in that the phrase will now take off, but less because of the TDS parody or Palin quip. Its because they themselves are making this phrase news – and there are enough loyal devotees of these two who are bound to use the juvenile term to demonstrate their keen insight into the media landscape.

Bad news for anyone eager to capitalize on this phrase that is suddenly sweeping the nation – the URL “lamestreammedia.com” was created almost seven years ago. Maybe THAT guy made up the term?