President Obama Avoided His Own ‘Hand-gate’ 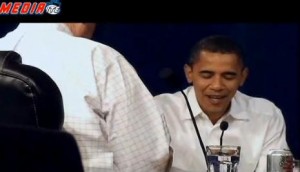 I was watching “By the People: The Election of Barack Obama” (available on HBO On Demand), and I noticed one of those funnier-in-hindsight moments that pop up sometimes.  This documentary reveals much of the artifice involved in any political campaign, but on the heels of Sarah Palin‘s much-hyped “Handgate” gaffe, there’s a neat pre-echo of that incident during a debate prep sequence. I think it underscores the silliness of the media’s newfound obsession with “optics,” and their misunderstanding of them.

“Optics” is a newish buzzword that’s shorthand for whether or not something “looks good.” I generally hate buzzwords, but this one is particularly insidious, because it is used by media types to give themselves a free pass on offering any context or analysis. You just say something is “bad optics” or “good optics,” and move on.

For example, Barack Obama’s use of a teleprompter at a middle school was bad optics, which relieves the observer of the duty to note that the significance of those bad optics is derived solely from an unfair, mainstream media-abetted double standard about Presidents and teleprompter use. If there were no teleprompter meme, that would not have been a story.

In Sarah Palin’s case, “Handgate” was also an example of poor optics, and while all but the most frostbitten Palinistas will say that it was devastating to her, she actually benefited from the media’s inability to properly contextualize. They followed her lead and drew a parallel to the teleprompter meme, rather than the much more apt comparison between Palin’s softball Q&A, and Obama’s question time, in which he jumped out of the frying pan and into a Benihana chef’s jacket to make flaming onion volcanoes out of House Republicans.

The reality is, Palin’s hand-scribbles mean very little on their own. Who hasn’t gotten a little rattled under pressure? As this clip shows, even cucumber-cool Barack Obama had an eerily similar brain-freeze, forgetting a list of 4 bullet points during debate prep. Did he consider an assist from a Sharpie?

Candidate Obama handles the whole thing with self-deprecating humor, but don’t think McCain/Palin wouldn’t have loved to have that bit of film for a campaign ad. 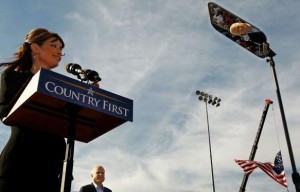 The rest of the film is well worth a look, even if it is the first 2008 campaign film I’ve seen that I’m not in. There are some remarkable inside moments, like then-Senator Obama’s Rodney Dangerfield-esque phone calls to Hillary Clinton.

There’s also this moment, which benefits from the hindsight provided by hot political gossip tome “Game Change.” Knowing now that there was a considerable amount of kerfufflery surrounding Palin’s concession non-speech gives this a neat, Rashomon-like quality: