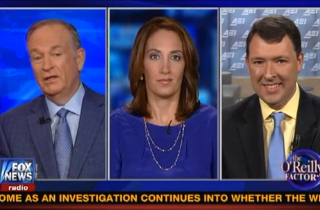 During Monday’s edition of The O’Reilly Factor, host Bill O’Reilly and his guest panel reacted to former Vice President Dick Cheney‘s assertion that the 2008 Republican vice presidential nomination of Sarah Palin was a “mistake.”

O’Reilly differed slightly with Cheney, stating that “Palin did help the McCain campaign,” adding that “no matter who they would have chosen they would not have beaten Barack Obama. O’Reilly then said that he believes Sen. Marco Rubio (R-FL) “would most likely help Mitt Romney the most but, like Sarah Palin it would be massive media attacks on Mr. Rubio. Is he ready to handle that?”

– RELATED: Dick Cheney On ABC: John McCain Made A Mistake Choosing Sarah Palin For VP In 2008

“I think he was effectively right,” Thiessen said of Cheney. “He was not trying to denigrate Sarah Palin…. John McCain didn’t lose because of Sarah Palin … I think what he is trying to say is that Romney needs a VP like Dick Cheney. He needs someone who is going to have instant credibility with conservatives and is going to be seen as one of their own but also somebody who has the gravitas and seen as ready to take on the presidency on the first day and first day in office.” Thiessen added that the “somebody” who could energize the base with gravitas would be Rep. Paul Ryan (R-WI).

Schaeffer added that Cheney’s comments “might be a little bit overblown,” adding that Palin “breathed new life into a campaign that was really rather pale in comparison to the sort of excitement that was surrounding president or then-Senator Obama’s campaign…. She did sort of an unprecedented role in terms of sparking voter turnout in the way that vice presidential candidates don’t usually have.”

“The problem,” Schaeffer added, “was it seemed as though she never really did the heavy lifting necessary to convince all voters and more main street voters that she would be ready” for the vice presidency.