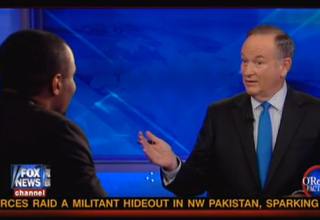 As the Occupy Wall Street protests went global (and violent) over the weekend, the increasing number of people turning out piqued Bill O’Reilly‘s curiosity this weekend, as, to him, the people attending appeared no more diverse than those protesting for the Tea Party Movement, which faced a number of accusations of racism. Tonight, O’Reilly asked Prof. Marc Lamont Hill why the minority turnout was so low and how, if at all, the Tea Party exhibited any more racism than Occupy Wall Street. As always with the pair, the debate ended in fireworks.

O’Reilly introduced the segment noting that the crowds at the live-ins tended to be white, asking, “is this a racist deal, or what?” Hill quickly noted that he was not in the camp that believed the protesters to be racist, suggesting that the numbers were mainly indicative of the theme of the settlement in private property in Lower Manhattan. “I don’t see black people at mass protests in general,” he argued, suggesting the black community had to expend a great deal more effort in fighting for civil rights, leaving much less time for standing up for other issues not exclusive to their community. The difference between Occupy Wall Street and the Tea Party, however, was to Hill the fact that the former did not have “pictures of monkeys” as the President, and that racists did not seem to align as quickly with their ideas.

“I’m not calling the Tea Party racist,” Hill replied, but instead said that “people who are racist identify with the Tea Party movement.” O’Reilly protested that it was too broad a brush with which to paint the movement, arguing, ultimately, that the two movements were “exactly the same” in that they opposed “excesses of power”– one by the government, and one by Wall Street and the banking world. Hill persisted, however, that “the ideology is stained by racism ostensibly on the right,” which then led the two to argue the merits of the Republican Party’s actions in the Civil War, and how applicable they are to the Republican Party of today.

Ultimately, O’Reilly refused to “see racism in either one,” with Hill coming to the exact opposite conclusion– not that both were racist, but that racial fringe elements could exist in both. O’Reilly got a second shot and debating the alleged bigotry of the Wall Street squatters in just a few segments.