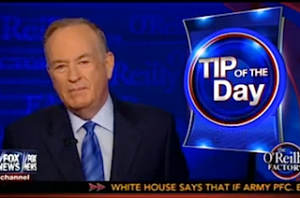 Al Jazeera America featured a very brief clip of The O’Reilly Factor in the network’s first five minutes on the air Tuesday, a fact that did not escape Bill O’Reilly. Last night at the tail end of his show, he dedicated his “Tip of the Day” to the new, “Arab-backed” 24-hour news channel, saying from what he’s seen it’s “deadly boring.”

During the introductory promo, Al Jazeera America held up O’Reilly, Al Sharpton and other cable news hosts as examples of what viewers will not be finding on the new network. Following the clips, an announced said “news audiences know what is missing and they know what they want” as the words “A New Choice” appeared on screen.

O’Reilly informed his viewers that Al Jazeera America, “backed by hundreds of millions of Arab dollars,” opened up “by criticizing me, saying it will not do what I do, whatever that may be.” Noting that he show is “going on its 18th season, that might not be a very good strategy on Al Jazeera’s part. And from what I’ve seen, it’s deadly boring.”

As the undisputed cable news ratings leader at 8pm, O’Reilly may have a point that his brand of news delivery has been proven more successful at delivering eyeballs than his cable news competitors. And until Al Jazeera America gets into more than its current 40 million homes, they don’t stand much of a chance against him.