O’Reilly Glosses Over ‘News Vs. Opinion’ While Yelling At Colmes’ Defense Of Al Jazeera 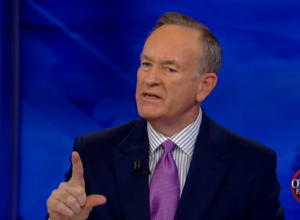 Last night Bill O’Reilly was not happy with ABC‘s Sam Donaldson and other members of the “far left” for openly praising Al Jazeera, which O’Reilly believes to be an anti-American and anti-Semitic television network. FOX‘s Alan Colmes stepped up to the plate to defend both Al Jazeera and Donaldson, yet Colmes’ defense failed to convince O’Reilly and even got him “a little mad.”

O’Reilly cited four instances where guests on Al Jazeera programs espoused anti-American opinions and argued he could spend the whole show rattling off more examples. Colmes claimed all those opinions merely came from guests on the network rather than being the opinion of the network itself, and wondered why O’Reilly as a journalist would not side with an institution taking advantage of a free press. Instead O’Reilly humorously acted out one of the anti-American charges, that “witchcraft” was practiced by Americans on detainees at Guantanamo Bay.

The fun ended though when Monica Crowley suggested the far left supports Al Jazeera because both are “anti-American.” Colmes thought the accusation was disgusting, and passionately repeated his defense of Al Jazeera, to which O’Reilly erupted with:

A few exclamation points should probably be included in that quote to accurately reflect O’Reilly’s mood. What seems ironic about this whole conversation is that Donaldson and Colmes are praising the news side of Al Jazeera, while O’Reilly is attacking the opinion side of Al Jazeera. This news versus opinion distinction is one that Fox News itself often demands its critics be aware of before anyone discusses the network.

Therefore, in the end it seems like everyone can come out a winner. Donaldson and Colmes are not anti-American for defending Al Jazeera’s hard news side, which reports the facts on the ground in Egypt and in other countries in the region with unparalleled access and specifics. And O’Reilly is not wrong to suggest that the opinion side of Al Jazeera is not as welcoming to opposing commentary as he himself is, as evidenced by his final statement, “I challenge Sam Donaldson to come on this network” to defend his position.