Bill O’Reilly On Pakistani Immigration: ‘If You Want A Cab In New York, It’s Pakistani’
video

Bill O’Reilly On Pakistani Immigration: ‘If You Want A Cab In New York, It’s Pakistani’ 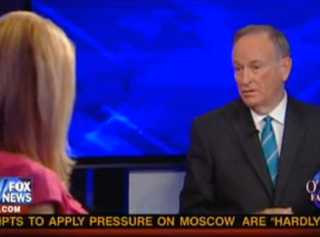 As usual on Wednesdays, Bill O’Reilly sent out his producer Jesse Watters to find some people willing to embarrass themselves on camera for him. This week’s was not a voyage to any liberal meccas, however, but merely a stroll around New York to ask Pakistani Americans how they feel about the man who helped the United States find Osama Bin Laden being sentenced to jail. During discussion about how the older Pakistanis seem to feel about the decision (favorably), O’Reilly emphasized the increase in immigration into America from that country by noting that “if you want a cab in New York, it’s Pakistani.”

Watters found a number of young Pakistanis who called their country “corrupt” and worried about the decision, but one man who thought it was deserved for the man to spend 30 years behind bars for helping the American government. “I think it was a split decision out there,” O’Reilly noted, “there were some hard-liners who don’t care about Obama,” but some who disagreed with the decision. Juliet Huddy, on board to analyze, was appalled: “Some of these people really concern me.”

With the higher number of younger Pakistanis, Huddy noted that this was due to high levels of emigration. “Pakistanis are the second highest growing Asian-American group in the United States,” she noted. O’Reilly replied with a comment reminiscent of Vice President Joe Biden: “If you want a cab in New York, it’s Pakistani– there you go.”