Bill O’Reilly To Sarah Palin: “Is That Presidential, You And Kate Gosselin In A Forest?” 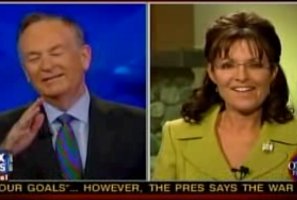 Bill O’Reilly had Sarah Palin on the Factor tonight, and he wanted to know something many have wondered: are Palin’s TLC program and new book presidential, or might they hurt her politically? Palin, of course, didn’t seem concerned.

Palin said she thought there was nothing non-presidential about the book, since it talks about her vision for America, so O’Reilly asked how the show, specifically, helps her politically – if it does at all. It was a bit surprising here that Palin didn’t take the opportunityto say something like, “Well, I don’t worry about how it affects my political career,” since it was a golden opportunity to do just that. Instead, she boasted of the premiere’s stellar ratings, saying it shows the program is doing a good job promoting Alaska, as she intended.

O’Reilly, though, wasn’t going to let the opportunity to tweak Palin over Kate Gosselin’s appearance on her program pass, leading to the best line of the segment:

“Is that poresidential, you and Kate Gosselin in a forest?”

Palin responded with a mock apology for not being “hoity-toity,” and indicated she would not appoint Gosselin to a Cabinet position.

The rest of the segment played out about how you’d think – i.e., a lot of decrying government control – with Palin saying a liberal woman can be a Mama Grizzly as long as they emphasize “individual responsibility” over big government. O’Reilly also had her address her belief she’s a feminist – Palin responded by slamming “hypocrisy with women’s rights groups,” which had to do with their supporting “bigger government” over promoting self-reliance and work ethic. Video of the clip, via Fox News, below.