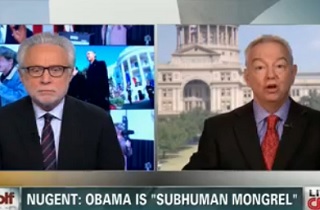 Decorated (with poo) veteran (of phallic gun fantasies about other men) Ted Nugent caused a mild headache for former Governor Mitt Romney (R-MA) in 2012 over whether the Republican presidential candidate had sought and welcomed the controversial figure’s endorsement (yes and yes). Now, Texas gubernatorial candidate and Attorney General Greg Abbott (R-TX) faces a similar problem, as he campaigns with the man whom Wolf Blitzer just called out for using Nazi rhetoric.

A few weeks ago, Nugent launched his latest verbal volley at President Obama, calling him a “subhuman mongrel,” among other things. On Tuesday afternoon’s Wolf, the eponymous host discussed Abbott’s decision to campaign with Nugent, and went into great detail about the historical origins of the rocker’s comments about the President. Blitzer asked Wayne Slater of the Dallas Morning News if the Abbott campaign was aware of “the history of that phrase, subhuman mongrel?”

“That’s what the Nazis called Jews to justify the genocide of the Jewish community,” he continued. “They called them ‘untermenschen,’ subhuman mongrels, if you read some of the literature that the Nazis put out there, there is a long history of that specific phrase he used involving the President of the United States.”

Slater said he didn’t know, but that Nugent’s history of outrageous remarks is easy enough to check. “When you talk about something like the word ‘mongrel,’ with its racial and ethnic and historic ramifications, there is no doubt, it seems to me, that whether or not Abbott’s people recognized it instantly or not, it’s offensive, deeply offensive, to some voters, and not just Democratic voters, but other voters,” Slater said, adding “might that phrase be a kind of dog whistle, and code to exactly some of the voters that Greg Abbott wants?”

Blitzer then went deep on Nugent’s remarks, telling Slater, “As someone who has studied the Holocaust and studied World War II, I went back and we checked, and during World War II, Julius Streicher, this is what he would say about the Jews in justifying the genocide of the Jewish people: ‘The Jew is a mongrel. He has hereditary tendencies from Aryans, Asiatics, Negroes, and from the Mongolians. Evil always preponderates in the case of a mongrel.'”

“That’s the history of that phrase,” Blitzer continued. “And a) I wonder if Ted Nugent himself knows that history, the use of that phrase; but b) the Republicans in Texas who are welcoming him on the campaign trail and saying, ‘You know what, he’s using some outspoken language, that’s Ted Nugent’ — do they know what this means to so many people out there?”

Here’s the clip, from CNN’s Wolf: