Bloomberg Making Sense: The NRA Would Defend Your Right To Own A Nuclear Cannon 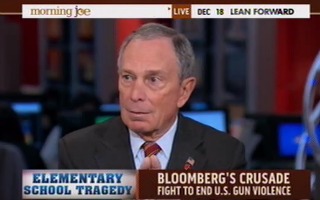 By now, if you have been paying attention to the pronouncements of Hizzoner, you know that New York City Mayor Mike Bloomberg really dislikes, among many other things, guns. He also appears to have engaged in a one-man crusade to convince politicians that, if the President of the United States can be reelected without the support of the National Rifle Association, so too can the most rural Congressman or Southern Senator. The logic of that belief is debatable, but what is not debatable is the logic that the NRA would go out of their way to defend the indefensible – even the personal ownership of a small cannon designed to fire nuclear-tipped artillery shells. Or, at least, so sayeth the mayor.

“The U.S. Army has a rifle — they call it a rifle, I would call it a cannon; it’s attached to the front of a tank or a moving vehicle,” Bloomberg said on Tuesday’s Morning Joe on MSNBC. “It shoots a nuclear warhead. The NRA would say, ‘Oh, that’s a gun. And people have a right to have that.’”

“Where is the limit here,” Bloomberg asked to co-host Mika Brzezinski as she nodded sagely in resigned disapproval.

I’m no expert on fire arms, but I would venture that “the limit” of what the NRA would defend in terms of an individual’s Second Amendment rights ends several miles before “nuclear cannon.” But we are now deep into the hyperbole phase of national tragedy – when those with axes to grind or pet projects to advance have already made their case many times over, and flail in search of new and more resonating arguments. Next, we enter the long-anticipated terrible analogy phase.

Mayor Bloomberg’s comical indictment of the NRA as being amenable to defending the average American’s right to own a fissionable device should, in a sensible world, give news producers pause when booking him for a pro-gun control spot. Especially those producers in favor of new gun control laws — Bloomberg is no longer advancing the best form of that argument. But, as the events in Connecticut last week proved, this is not a sensible world.