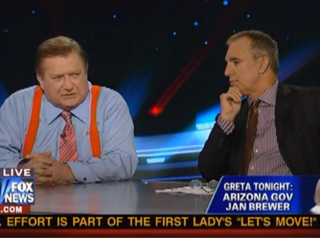 Football player Tim Tebow found himself the center of tonight’s conversation on Hannity‘s Great American Panel, but despite his football and Christian credentials– both things that make him a positive figure in Sean Hannity‘s eyes– he did not escape getting a tongue-lashing from someone in the panel: Bob Beckel, who found the conflation of faith and football “despicable.”

RELATED: Bill Maher Slams Religious Conservatives: ‘Who Needs The Government If You Have Jesus?’

The panel began with a discussion on Tebow’s image, in which panelist Rebecca St. James argued that he was a good role model, which actor Jay Thomas disagreed with: “I have no interest in my sons being like Tim Tebow.” The conversation then veered towards the benefits of premarital sex (St. James is an advocate of waiting until marriage; Thomas prefers to “test drive” his cars before buying them, if you know what he means), when Beckel burst into the conversation. “Back to Tebow for a minute– I find it despicable that they would put Jesus on the back of an NFL jersey… he is the one and the only one that matters in this world and the idea of bringing that to the level of the NFL,” he griped, adding that someone on The Five earlier today had claimed “Jesus must’ve been in the locker room with Tim Tebow, this is ridiculous.” The panel disagreed, with St. James reminding Beckel that Tebow was not the one putting “Jesus” on NFL jerseys, but fans. The conversation once again turning back to premarital sex, Beckel quipped, “Does anybody think Tim Tebow didn’t have sex [before joining the NFL]?”

Figuring out what was going on in this clip was a bit difficult for this blogger, as some of us who follow politics have a hard time understanding this Tim Tebow– he is not running for president and does something called “sports.” A more thorough analysis from our pals at Sportsgrid seem to suggest he is a football player whose only discernible characteristic as a football player are that he is a Christian, and this is the source of much of his popularity. He first made political headlines when his mother did a Focus on the Family ad expressing gratitude for his birth. Subsequently, he has become something of a lightning rod because some people claim he is a bad football player, while others chalk up the criticism to his over-the-top displays of faith. He also does something called “Tebowing,” which a quick Google search defines as “to get down on a knee and start praying, even if everyone else around you is doing something completely different” (in which case, my abuela has been “Tebowing” every time someone says something mean about the Pope since the mid-1970s).

Beckel did neither tonight, however, which appears to break new ground in the debate on Tebow’s cultural significance in America. Instead of either defending his First Amendment rights or bashing his football skills, he turned to the idea that Tebow’s effusive expressions of faith are a major factor contributing to his price as a player– it makes him lucrative because it drives a certain type of individual to tune in and cheer for him, to buy tickets and memorabilia. And that, Beckel argues, is no different than profiting off of the faith itself. It is an argument far more akin to, say, the arguments against Rick Perry‘s “Strong” ad than anything sports-related– a plea to not use God in any of his forms for personal gain, rather than a ribbing for being obnoxious with displays of belief in a benign way. And as the most political argument made against Tebow so far, it may be the most effective in both grabbing people’s attention who would otherwise prefer not to know things about sports and the most effective argument against allowing Tebow to accrue capital with which to influence popular culture.