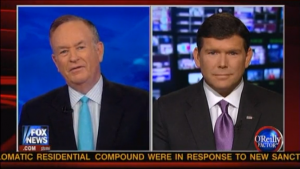 Baier gamely explained why it was that he’d asked Romney about “RomneyCare.” Yes, again:

Well it lead, Bill, to another question about some of the statements that had been used in ads, both by the DNC and Jon Huntsman and others, that are current and in which he has, he says in these clips, that it’s a model for the nation. He’s been clear that health care in Massachusetts was, in his mind, for the state. But I wanted him to clear up some of these clips that have been out there. That’s why I went down that road. And he clearly got upset with the question.

He was irritated by the interview after we were done.

“Well, he just made it clear at the end of the interview,” Baier responded, later adding that Romney had thought the interview was “overly aggressive.”

“Wow,” said a rather surprised O’Reilly.

“As we were walking in the ‘walk and talk,'” Baier continued, “and then after we finished, he went to his holding room and then came back and said he didn’t like the interview and thought it was uncalled for.”

When pressed by O’Reilly on what else might have irritated Romney, Baier obliged:

Well, I mean, I started with the union leader endorsement of Speaker Gingrich […] and the fact that they said, in not so many words, that Mitt Romney lacked conviction.

Baier added that he wasn’t trying to put Romney in a spot with “gotcha” questions, but, rather, was trying to get the candidate to address current issues and talking points relating to his campaign. “He’s under attack,” said Baier. “If you look at any analyst, they’ll say his biggest vulnerability is what he said back then and what he’s saying now. And I was giving him the opportunity to address that head on.”

Have a look at O’Reilly and Baier’s full discussion below, via Fox News: