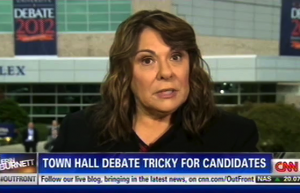 Yesterday TIME released a document drawn up by the Commission on Presidential Debates that came about as a result of what the Obama and Romney campaigns did not want to happen at tonight’s second presidential debate. Some of their whining (let’s call a spade a spade, shall we?) is trivial in its stupidity, like the agreement that neither candidate shall walk outside a “designated area,” while the rest of it encapsulates just how little these campaigns want to actually face tough questions. Case in point, the agreement that moderator Candy Crowley would not get to ask follow-up questions. But amazingly, in a rare display of someone in the media not giving a crap what politicians want, Crowley is insisting that she will still ask follow-ups of both candidates if they do not answer the questions posed by the people on the debate stage.

RELATED: Attempt To Indict Candy Crowley For Bias Before Debate Is Unnecessary, Groundless

In previewing her role as debate moderator last week, Crowley said that after the town hall participants ask their questions, “there is then time for me to say, ‘Hey, wait a second, what about X, Y, Z?'” Well, the very thought of being called out for saying something inaccurate was enough for both campaigns to come crawling back to the Commission on Presidential Debates to complain that they don’t want Crowley to do her job. Crowley was not party to the agreement drafted by the commission, although the commission did say they would reach out to Crowley to “reconfirm her function.”

“Reconfirm her function.” That sounds like she’s a robot that needs to be reprogrammed. Which is probably how the campaigns view these moderators anyway. Democrats were critical of Jim Lehrer‘s debate performance because they claim he let Mitt Romney walk all over him and take command of the debate. But at least once or twice during that debate, President Obama was equally dismissive of Lehrer’s moderation, saying at one point, “I had five seconds before you interrupted me.” Lehrer let the candidates run the show.

The candidates’ demands for Crowley are even managing to offend the rest of the normally-placid media, with headlines like CNN’s “Campaigns fuss over debate moderator actually asking questions” and The Washington Post‘s “Obama, Romney camps both worried that Candy Crowley will ask questions.”

On the commission’s website, it explains its mission statement as “to ensure that debates… provide the best possible information to viewers and listeners.” Well, how exactly are viewers supposed to get the “best possible information” if the moderator isn’t allowed to call the candidates out for peddling false information or not giving the right information in response to a particular question? It’s almost as if the stated goals of the Commission on Presidential Debates are a steaming pile of animal feces.

Last night, during an appearance on Erin Burnett‘s program, Crowley explained the role she wants to play, and exactly when it would be appropriate for her to ask follow-ups.

What Crowley says represents a very basic principle of journalism: whether you like it or not, I’m going to make you answer the question. What exactly is Crowley’s more important task here? Being a journalist or respecting the format of the debate as agreed upon by the two parties without her involvement?

According to The Daily Caller’s Matt Lewis, it’s the latter.

I’m sympathetic to the notion that candidates should be taken out of their comfort zones — and that debates shouldn’t simply be a horse and pony show.

But the time to hash that out is before an agreement is reached — not retroactively.

If Crowley doesn’t like the deal struck between the campaigns, she should bow out now. But what she should not do is unilaterally decide to break the rules the campaigns’s agreed upon rules.

Clearly Crowley doesn’t view it that way, because she has already made it clear “she does not feel bound by any agreement between the commission and the Obama and Romney camps.” I understand where Lewis is coming from, but Crowley’s not breaking any laws here, what this amounts to is little more than a “bro code” between the campaigns and the commission. And why exactly does a journalist have to be party to that?