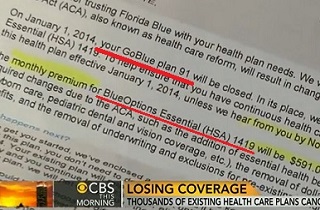 Not content with a website that performs like a Yugo with sugar in its gas tank, the mainstream media has continued to broadcast misleading, deliberately incomplete, and one-sided reports on the effects of the Affordable Care Act on consumers. The latest champion of the form is CBS News’ Jan Crawford, whose report on 56 year-old Dianne Barrette of Florida has become a North Star for those seeking to undercut the health care law by claiming that her premium increased tenfold under Obamacare, without disclosing that what Ms. Barrette was paying $54 a month for barely qualifies as insurance.

On CBS This Morning, Crawford reported that 56-year-old Dianne Barrette received a letter last month “from Blue Cross Blue Shield, informing her that as of January 2014, she would lose her current plan. She pays $54 a month. The new plan she’s being offered would run $591 a month, ten times more than what she currently pays.”

“What I have right now is what I’m happy with,” Barrette says in the report, “and I just want to know why I can’t keep what I have. Why do I have to be forced into something else.”

There are very good answers to her questions, answers which Crawford, either deliberately or through ignorance, failed to report, answers which are available to anyone with a passing familiarity with health insurance.

First of all, the plan that Barrette paid $54 a month for is barely health insurance at all. It’s part of a subset of insurance that Consumer Reports calls “junk health insurance” (and which even the company that sells it recommends that customers not rely solely upon) and it pays only $50 towards most of the services it covers. That’s it. If Dianne went to the doctor every week for a year, her plan would pay, at most, $2600. Meanwhile, based on average office visit charges, Diane would pay about $5,600.00. She probably doesn’t go to the doctor every week, of course, which means her plan pays a lot less, while her premium buys her a lot less. If she goes to the doctor, say, six times in a year, she’s paid a $648 premium for the privilege of spending another $600 on office visits. The plan also pays up to $15 per prescription, which will get you a few milligrams of most prescription drugs. The one decent deal on her plan is that it covers 100% of in-network lab services.

But many people just want the peace of mind to know that if something really bad happens, they won’t have to worry about being billed into the poorhouse. What if the worst happens, and Dianne needs to be hospitalized due to sudden illness or injury? Well, unless Dianne is suffering complications due to pregnancy, her plan covers nothing. If she’s having complications from pregnancy, it covers fifty bucks. It’s entirely possible that now-healthy Dianne is “happy” with this plan, but the whole idea behind the Affordable Care Act is that the rest of us are not happy having to pick up the tab if Dianne gets a disease, has an accident, or otherwise needs to go to the hospital. Frankly, though, Dianne would be better off saving that $648 and negotiating her office visits on her own.

The plan that Crawford compares Dianne’s junk insurance with (even BCBSFL recommends that customers not rely solely on GoBlue plans), on the other hand, is probably not the best deal available for the money if you’re planning fairly regular doctor visits, but it’s just one of many plans the company offers in that price range. It has a $6,250 deductible that applies to most services (the law requires routine care to be covered at 100%) before the plan pays. However, there’s a cheaper plan ($547/mo.) that covers the first 3 office visits per year at 100%, with a $40 copay after that. BCBSFL offers nine other plans cheaper than the one suggested in Dianne’s letter.

Like all Obamacare plans, of course, any plan Dianne chooses will have an out-of-pocket maximum of $6,350, versus the current $infinity that her plan offers.

Additionally, Crawford reports that Dianne “is eligible for some subsidies,” but “she has no idea what the subsidies would be because, of course, guess what, she can’t log on the website.”

Of course, Crawfod must know that you don’t have to log in to Healthcare.gov to get an “idea” of what the subsidies would be. If Dianne makes about $17,000 a year, in fact, she’d pay exactly what she did for that junk insurance, but even if she makes Florida’s princely median income, her premium would be a much more reasonable $332.50/mo. If Crawford had wanted to, she could have provided an accurate estimate of Dianne’s actual premium.

But how, you may ask, was Jan Crawford supposed to know the details of the GoBlue plan 91 that Dianne was on before, and the new BlueOptions Essential (HSA) 1419 plan she’s being offered? She could start by watching her own report, and its unredacted copy of Dianne’s letter: 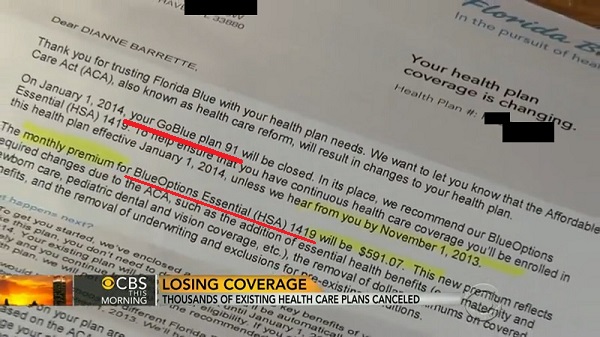 That and Google would have produced valuable information for Crawford’s viewers, information which might not have served the mainstream media narrative of the moment, but which would have cast Dianne’s predicament in a drastically different light. She’s basically complaining that a new car costs more than her old shoes. There’s a decent chance that Dianne Barett doesn’t even know what her current plan does or does not cover, but it’s not her job to inform the public, it’s Crawford’s. Now that her fake nightmare scenario has made the jump to the White House briefing room, it is absolutely essential that CBS News correct this misleading reporting.

Update: As I suspected, Dianne Barrette has no idea what her plan covers, and her actual premium under Obamacare would be about a third what CBS reported. She tells the Erik Wemple Blog that her plan has a “$50 copay,” when in reality, that’s the amount her plan will pay toward an office visit (she’s responsible for the rest), she says it provides “outpatient only” hospital care, but the plan only covers $50 of a very narrow set of outpatient services (mammography, osteoporosis screening, diabetes self-management, and complications from pregnancy).

She also told Wemple that she makes around $30,000 a year, which would put her Obamacare premium at about $209/mo. That’s for a plan that is literally infinitely better than what she had.