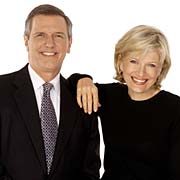 Remember when an anchor stepping down was a huge deal? Tom Brokaw. Dan Rather. Peter Jennings. These names were huge pillars of the news ecosystem, and their departures were big stories — as well as the fraught issue of who had the gravitas, the experience, the journalistic, anchorly heft to step into their enormous shoes.

The last transition was just a few years ago, but oh how things have changed. Today, the news that Charlie Gibson is leaving ABC’s World News after only a few years in the top spot is definitely news, but is shaking no foundations. It’s also not at all surprising who is replacing him: Diane Sawyer.

And why should it? Sawyer’s got a track record a mile long. She’s an accomplished journalists, well-known to ABC viewers over the year, a longtime partner of Gibson and equal to him in stature at the network, as well as in the upper echelons of that news ecosystem.

Well, for one thing, Sawyer’s a woman.

Remember when that was a big deal? Cast your mind back to 2006. Katie Couric had just been announced as the successor to Dan Rather (or, really, Bob Schieffer), and the entire media community was in a tizzy. What would she wear? Would her hairstyle change? Would we still get to see those famous legs? I’m serious; this was the subject of legitimate debate in legitimate news outlets. The coverage of Couric’s ascension to the top spot at CBS, at its core, was about how viewers would react to a pretty, perky woman delivering their nightly half-hour news round-up.

Over at ABC, Sawyer was not impervious to that trend. The spring of 2005 had seen a spate of Katie–vs–Diane stories over the GMA/Today Show ratings, and after Bob Woodruff‘s terrible accident in Iraq ended the pairing of he and Elizabeth Vargas leading the broadcast in early 2006, both Gibson and Sawyer quietly started maneuvering for the anchor position.

According to Howard Kurtz in Reality Show, his book chronicling the anchor wars, Sawyer and Gibson were in contact about the ascension possibilities, as partners on GMA for eight years prior, but there were definite backroom goings-on as well. There was more: Sawyer also felt the added weight of the Couric treatment, very much aware of how the media would treat them as competitors:

It would be like every movie that featured two women battling it out. Women made great copy, that was the way the popular culture worked… She did not want her evening news tenure to be viewed through that prism. If she went to Darfur, the stories would be all about how she was trying to demonstrate that she was more interested in the plight of refugees than Couric was. She would be cast in a catfight.

We all know what happened: Gibson took over the ABC anchor chair. Couric took over at CBS. Sawyer remained at GMA, ever valuable to the network. Come January, she’ll finally be making that switch from morning to evening, to one of the hallowed Big Three anchor chairs.

Why bring all this up now? Things seem so different now, don’t they? Katie Couric has been on the job for three years now, and when it comes to waving scalps, Sarah Palin‘s is a pretty decent one to have claimed. Gibson’s depature from the chair is news, certainly, but as previously mentioned it won’t rate the kind of wall-to-wall coverage of the Brokaw-Williams handover, so carefully brokered and so seamlessly managed back in December 2004. New media upstarts enjoy dancing on the grave of the nightly news almost as much as they do that of newspapers. 20+ million viewers though the Big Three claim each night, there’s no doubt that the timeslot is not the big dog it once was.

Things are different — but that’s why it’s worth noting. Katie Couric’s been leading the CBS Evening News for three years and it’s still on the air (albeit with diminished ratings share). Charlie Gibson, for all his XY-chromosome-ness, never did manage to permanently unseat Brian Williams from that top spot. And in truth, there could not be a more perfect replacement for Gibson at ABC than Diane Sawyer, whose reporting chops, professionalism, longevity and on-air authority make her the ideal for a seamless transition.

But — looking ahead, there will be stories about how it’s BriWi vs. The Girls, and real data there, too, about whether or not viewers are switching over. There will be catfight stories, especially if ABC and CBS start getting close in the ratings or double-dealing for big-time exclusives. There will be assessments of Sawyer’s wardrobe choices and hairstyle, comparisons with the choices Couric makes and has made (here’s a potential headline: Will Diane Sawyer Cut Her Hair? Katie Did!). Looking ahead is made somewhat easier by looking back, and the fact that those articles about Couric’s wardrobe may have been in 2006, but chatter about Hillary Clinton‘s pantsuits and Sarah Palin’s Naughty Monkey pumps are decidedly more recent.

Looking ahead, those will be the stories — but so, too, will be the story of how a longtime ABC stalwart with an award-winning career took over one of the most important posts, still, in news — and the whole thing didn’t fall apart. That’s the thing about progress. It just sort of happens.