Chris Christie: ObamaCare Mandate Both A Tax And ‘Meant To Penalize People’ 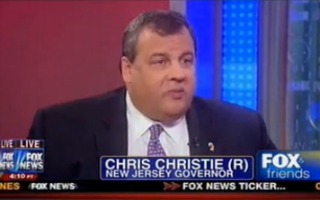 New Jersey governor Chris Christie visited Fox & Friends Tuesday to speak about on a number of topics. After disagreeing with the notion that the Romney campaign should basically “clean house” (voters, he argued, don’t place too much stock in what surrogates and advisers have to say), Christie was also relatively unconcerned with poll data showing that 41 percent of American didn’t know the health care ruling came down last week.

“It’s July, he pointed out. “Real Americans are on vacation. They’re relaxing with their families. And they’ll get tuned into it. But it never surprises me. It concerns me, because I’m someone who is very plugged into this, as you are. And I care about it deeply. But you need to understand, you got the American people out there who are struggling to pay their mortgages, who are struggling to pay their kids’ tuition that’s going to come up this summer to send them to college. Who would love to have a few dollars to put together to take their kids to the Jersey Shore — which is what they really should do.” Ultimately, he said, he’s disheartened by the news, because ObamaCare is among several issues American should be paying attention to, but he’s not shocked.

Host Gretchen Carlson said she wasn’t shocked for more cynical reasons, pointing out that many American can’t even name the Vice President.

Christie also spoke about balancing New Jersey’s budget, focusing on “investing in the things that make sense.” He also shared that, recently, Democrats walked out on his special session to cut taxes. “Listen,” he said. “The bill was there and they could voted on it and said ‘listen to my speech’ and they left without voting. While the people of New Jersey are suffering under the highest tax burden of anybody in America and I’m trying to cut their taxes after reigning in spending and doing it responsibly, they say let’s wait until December or January to cut taxes. Well, that doesn’t help the family this summer who is looking for some certainty for tax relief.”

Later, when asked whether ObamaCare’s individual mandate is a tax, Christie responded thusly:

Sure. Yeah. I mean, listen, I thought all along that it was a tax. And I don’t think it’s exclusively a tax or a penalty. It’s both. And there’s no question in my mind about that, it’s both. They’re meaning to penalize people and they argue in the Supreme Court it was a tax. Now, of course, you argued in the campaign and forward that it wasn’t, but he’s now in a bind. He’s in a bind as to what this is all about. But I think there’s no question that it’s both. It’s meant to penalize people and it is a tax. There’s no doubt. Because we have to pay for the government program.