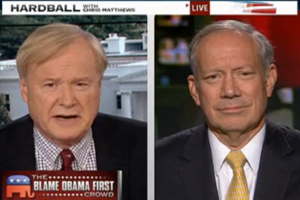 On yesterday’s Hardball, host Chris Matthews, upset with what he perceived to be the right-wing desire to blame President Barack Obama for things over which he has little control, had former New York governor George Pataki on to explain the mentality of the “blame Obama first” crowd. Pataki felt the Obama administration could be doing more to prevent terrorism before it happens rather than fighting it when it does, but Matthews didn’t just want him to defend his ideas, he wanted him to defend or renounce the ideas of Rush Limbaugh, too.

Matthews asked Pataki if he thought the work the NYPD had done in catching failed terrorist Faisal Shahzad was not good enough, which Pataki denied, and only added that “what the government needs to do more of is prevent these terrorists from getting so close in the first place,” not just catch them when they’ve committed a terrorist act. Then Matthews asked him about comments made some on the right that Obama should be working to prevent people like Shahzad and the failed Christmas Day bomber from traveling, to which Pataki again replied that there was a failure in keeping both of these people off of planes despite being on the no-fly list.

The thing that Matthews was most infuriated by, however, seemed to be a claim from Rush Limbaugh that Shahzad was a registered Democrat. “Where does your side get this nonsense?” he asked Pataki. “I can’t find anyone center, center-right, or right who will take on this guy Limbaugh.” Pataki then “took on this guy Limbaugh” and distanced himself from those comments, but Matthews continued, “does it matter that you’ve got someone on your side of the political world that is out there accusing a bomber of being a Democrat, like he’s on assignment from the Democratic central committee? I mean, this kind of talk is so alien to America”

“It’s not really,” Pataki replied, “You just have to watch some of your colleagues on MSNBC.”