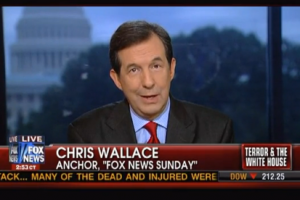 When news broke earlier this morning that a U.S. missile had reportedly killed Anwar al-Awlaki, most reporters were focused on the details (and ethical questions) surrounding the news. But by this afternoon, cable news analysts started to consider what sort of impact this story has on the world of politics. Case in point, Fox News’ Chris Wallace suggested to Studio B host Shep Smith that the so-called “war on terror” is a political strength for the Obama campaign, noting his administration has taken down the “two greatest threats to America.”

Shep introduced the segment, and Wallace said of the president’s record on fighting terrorism in the context of a political strength or weakness (rough transcript provided by TVEyes):

Remember, this was the guy who, when he ran four years ago, Hillary Clinton was saying, “what happens if there is a phone call at 3:00 in the morning?” There was talk of his dealing with former terrorists and all of that and now when it comes to the war on terrorism President Obama legitimately looks like a tough guy stepping up involvement in Afghanistan and kept us in Iraq but he plans to have us out by the end the year, and he has greatly increased the number and the effectiveness of drone attacks and not only in Pakistan but now as we see in Yemen, and he has taken out, you could argue the two greatest threats to America, Osama bin Laden and al-Alwlaki.

The notion that the fight against al Qaeda and Islamic extremists has been Obama’s most effective political attribute isn’t a new idea. In fact, just a couple of weeks ago another media and political analyst made THE VERY SAME point during an appearance on Fox News: yours truly!

Yes, it was I that made the same point as Mr. Wallace (an individual for whom I have new-found respect and admiration for his smart political observations). Regardless of one’s political beliefs, President Obama has a terrific track record in terms of capturing and killing members of al Qaeda, and ostensibly keeping the “homeland” safe and secure. So why isn’t the White House using this as a political football?

Perhaps because they believe that “terrorism” is a more effective tactic when a group of people are afraid of random acts of violence. And to tout the record of keeping a nation safe from a clear and constant danger means that one must first reinforce the idea that we are constantly on the verge of being under another attack, which plays right into the strategic hands of the terrorists themselves. In practical terms, this is almost a catch-22: the safer President Obama makes Americans feel, the less his proficiency at it benefits him.

It’s honorable that the Obama administration hasn’t yet played the “war on terror” card, and yes, I will admit that the attacks on 9/11 are a personal story of which I have grown deeply cynical, in terms of a political strategy. Watch the clip below and see for yourself: