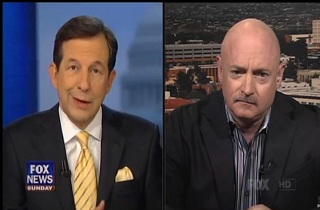 Chris Wallace challenged gun control advocate Mark Kelly, wife of former Congresswoman Gabby Giffords, on the effectiveness of expanded background checks.
Wallace noted that the laws Kelly is pushing for probably wouldn’t have prevented the tragic shooting of his wife.

Jared Lee Loughner passed a background check when he legally bought the gun he would later use in the horrific mass shooting deaths of six people outside a Tucson, Arizona strip mall. Wallace noted that Loughner was suspended from his college because he was considered a threat to himself and others but was still able to buy a gun. This information never appeared in the background check he underwent.

He still could have bought a gun from a gun show or on the internet, Kelly noted, without a background check.