Christie No Longer BFF with Morning Joe? ‘There’s an Agenda’ at MSNBC

Christie No Longer BFF with Morning Joe? ‘There’s an Agenda’ at MSNBC 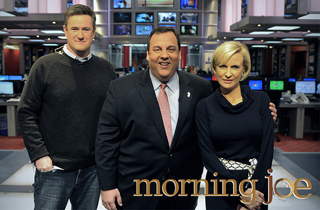 Once upon a time, New Jersey Gov. Chris Christie was the rare Republican bird who would willingly go on MSNBC’s Morning Joe — and was, in fact, friends with Joe Scarborough and Mika Brzezinski. Now he does not, and Morning Joe mocks him (because they are no longer friends), and Christie is sure that it’s because of Bridge-gate.

“There’s an agenda at the network level at MSNBC,” Christie said during an interview for The New York Times Magazine, accusing Joe and Mika of falling under the corporation’s ideological sway. “All these folks have to march in line in order to keep their jobs.”

He also wondered why Morning Joe didn’t seem to like him no more:

I asked Christie if he thought Scarborough and Brzezinski were taking orders from corporate bosses. “I don’t know,” he said. “But it seems to me there is a completely different approach to me than they were approaching me in the past.” (When I asked Scarborough if this was true, he said: “We saw him at the Vanity Fair-Bloomberg party last spring, and he stormed right past us. Mika and I just looked at each other and laughed. It’s a question of temperament with him.”)

A quick review of Mediaite’s archives reveals that Morning Joe‘s ardor towards Christie has cooled: In the last month alone, they’ve chastised Christie for yelling at hecklers and quarantining Ebola nurses,, and thinking he could run for President: “I’m just going to say, if you want to know what Mitt Romney is thinking, nobody thinks Chris Christie can win.” (This is a drastic change from April, in which they speculated that Bridgegate could help Christie prepare for 2016.)

At the very least, Christie now has some Republican street cred:

Haley Barbour, the former governor of Mississippi and former chairman of the Republican National Committee, said, “A lot of people who vote in our primaries think that if MSNBC attacks you for a month, you must be better than I thought you were.”