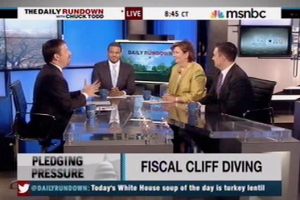 The Daily Rundown‘s Chuck Todd hosted a discussion about the fiscal cliff negotiations on Monday, taking a look at the Senate “sideshow” on the matter. The issue is mainly between the White House and the House, he said, essentially making the Senate a group of “100 elected pundits.”

Those in the media get caught up, Todd said, thinking that when senators speak, “Oh, it must mean something.”

Turning to his panel, he asked, “Is it too harsh to say the Senate is 100 elected pundits, right now? That basically they’re a sideshow while the real action is between the House and the White House?”

Susan Page agreed, citing a change in tone in the discussion about reaching a deal. More politicians seem

“Grover Norquist is like reporter heroin in this city,” YG Action Fund’s Brad Dayspring said, also pointing to a shift in tone, referring to House Majority Leader’s Eric Cantor‘s sidestepping answer when asked about the pledge on Morning Joe this morning. “The real question is, is the White House willing to do something significant to get these costs under control.”

The panel went on to discuss where members of each party may be willing to budge — and the type of deal that could come out of those compromises.

“You are not going to have a deal that only has taxes and doesn’t do anything about entitlements,” Page said. “That’s not acceptable even to the Republicans who have indicated they would defy the mythical Grover Norquist.”