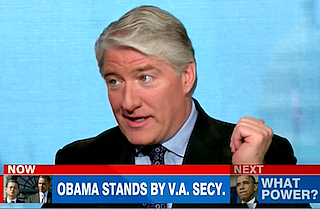 After President Barack Obama disappointed many by not firing Veterans Affairs Secretary General Eric Shinseki yesterday, Inside Politics host John King wondered Thursday morning if Obama was keeping Shinseki on to absorb more of the fallout from the ongoing investigation(s).

“It sounded to me more like, well, we’ve got this investigation going on and I’m going to keep this guy around to catch the harpoons for a while and then he’s gone,” King said.

“The president has left the door open to the possibility that Shinseki could be out,” Associated Press’ Julie Pace said. “I think he almost had to do that. But there is a view that unless something comes out of these reports that directly implicates Shinseki, that the White House is going to err on the side of leaving him in this job to oversee this process.”

“It’s pathetic,” said National Journal’s Ron Fournier. “If you’re an American sitting out there and you know a veteran, if you drive by a VA, if you like to have your government actually function, if you saw the President of the United States come out yesterday and say, ‘Way to go, Sheki’ — you’ve got to really serious problem. The idea they’re going to keep this guy on and he comes out after this has been going on for a month?”