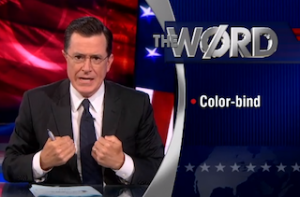 “The Word” has always been Stephen Colbert‘s answer to Bill O’Reilly‘s “Talking Points Memo.” And that was never more true than last night, when Colbert delivered his unofficial response to O’Reilly’s own rebuttal to President Obama‘s race speech Monday night.

Colbert’s Word of the night was “Color-bind” and he began by speaking directly to his audience as a white man. “It’s time that we Caucasian-Americans accept that when it comes to furthering the racial dialogue, the ball is in our court. Even though having a ball on a court has never been our strong suit.” After Obama’s frank remarks on what it means to be African-American, Colbert said it was his turn to “be honest about the white experience: Black people are scary.”

Lest anyone attack him for that statement, Colbert pointed to similar ideas and statistics put forward by Fox News’ O’Reilly, Bernie Goldberg and Chris Wallace over the last few days. “That’s not prejudice,” Colbert said in their defense, “that’s just math.”

After doing some math of his own, Colbert concluded that white people only need to “reasonably be scared of” .009% of black people. Or as his bullet point put it, “99 problems but 99.99% of black people ain’t one.” Colbert added, “it doesn’t sound like a lot, until you consider that we don’t know which nine-thousandths of one percent. So, to be safe, we have to scared of all of them.”

Now that white people have admitted they’re “terrified,” Colbert said, they have done their part in the racial conservation. “But it’s a two-way street, black people.” Addressing all of his African-American viewers (“both of them”), Colbert said, “it’s your responsibility to change how white people feel about you.”

Taking a page from Obama’s book, Colbert said the answer is for black people to join the Senate. “Once you’re elected to the Senate, no one’s going to think you’re going to do something to them.” As the bullet said, “Shocked if you do anything.” Then, Colbert said to his black viewers, “maybe someday, you too could be president. Then you’ll never inspire irrational fear in white people again.”