Concha: A Year of Poor Decisions Show Why It’s Time for a Change of Leadership at MSNBC 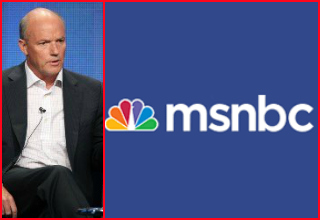 Before we begin, a disclaimer:

This column is not about MSNBC’s narrative…not about its ideology or advocacy. The decision by MSNBC a few years ago to go left, to be the anti-Fox, should be applauded, as it boosted what used to be anemic ratings (averaging about 350,000 viewers in primetime).

Believe it or not, MSNBC used to be down the middle: Imus, Tucker Carlson, Michael Savage and Joe Scarborough once all had their own shows, for example. But it simply wasn’t working. The network just didn’t have an identity.

Then along came the rise of Olbermann and then Maddow, who both were aided by a decision by then NBCU CEO Jeff Zucker and MSNBC President Phil Griffin (following Olbermann’s lead) to create a more opinion-based platform. From there, the additions of Al Sharpton, http://www.mediaite.com/power-grid/person/?q=Lawrence+ODonnell”>Lawrence O’Donnell, Chris Hayes, and Ed Schultz (along with many other progressives), were made, Morning Joe was created (to replace Imus), and the rest is cable news history. And while MSNBC is still getting beaten by Fox News by 3-1, even 4-1 margins, it’s a significant improvement from where the network once was.

So with momentum at his back following the re-election of President Obama, Griffin felt he had the gravitas and instincts to make some bold pronouncements and even more on-air talent hires.

Unfortunately, every single one (particularly since Zucker left) has been ill-advised and ill-considered, respectively.

So as the headline indicates, there needs to be a change at MSNBC. But not to its liberal presentation…that isn’t at issue. Instead, it’s time for Comcast to politely show Mr. Griffin the door for several other reasons, including:

Griffin told The New Republic in March he expected to beat Fox by the end of the calendar year. An odd declaration given it’s a non-election year (when breaking news/human interest stories are more apt to outflank political analysis) and the lack of a big-time progressive star (say, Jon Stewart or Bill Maher) being signed by the network. Instead, Griffin misread the tea leaves of higher ratings leading up to the 2012 election and thought the audience would remain loyal to MSNBC personalities.

Turns out they loved the storyline of Obama vs. Romney.

The storytellers? Not so much…

So instead of jumping to 1st place, the network fell to 4th during the George Zimmerman trial. Which led to the next reckless declaration by Griffin:

“We’re not the place” for breaking news. “Our brand is not that.”

When asked why his ratings were tanking in June, Griffin punted on a major aspect of being, you know, a cable news station. By stating publicly that his network isn’t terribly interested in breaking news stories—where the biggest ratings can often come from—he essentially turned MSNBC into the Olympic games (which occur once every two years). You want coverage of terror attacks like the Boston Bombings, natural disasters like Hurricane Sandy or the Oklahoma tornadoes…or human interest stories like the Cleveland kidnappings? Griffin inexplicably says don’t even bother coming to MSNBC unless politics are at the forefront.

The irony is, MSNBC did a fine job covering the Boston Bombings (Chris Matthews openly speculating about right wing suspects shortly after notwithstanding). They were particularly good with reporting on the aftermath of the Oklahoma tornadoes this year as well. Many would argue that the best reporter on the grid is NBC’s Pete Williams, who showed how invariable an asset he is during the Boston manhunt. Of all the networks covering the story, Williams was easily the best out there.

MSNBC itself may not have a Shepard Smith or Anderson Cooper, but it does have the NBC News mothership and all the assets that come with it. For Griffin to punt on breaking news–despite having network resources at his disposal for huge events–was in itself a reason for termination alone.

Moving Chris Hayes to 8:00 PM and Ed Schultz to weekends and again back to weekdays.

Mr. Hayes is an intelligent guy. His weekend morning show before moving to primetime was wonky, thoughtful and perfect for that timeslot. But moving him to primetime–absolutely the wrong place and time for his kind of show and personality–has resulted in the opposite of a rising tide lifting all boats. Keith Olbermann averaged 1.2 million viewers when he fired in 2011. Hayes has been averaging half that since taking the reins of any cable network’s most important timeslot. Maddow’s and O’Donnell’s numbers have noticeably suffered as a result.

As for Schultz, the curious move from 8:00 PM weekdays to 5:00 PM on weekends (for a few months) only to bring him back to weekdays (this time at 5:00 PM) illustrates little long-term thinking. And with every move, every change, it damages the Schultz brand. Is he on in primetime this week, late afternoon, weekdays, weekends? Is he part of the network’s political coverage on election night? Does the network have confidence in him? These are all bad questions, and Comcast and Schultz have only Griffin to blame.

If Baldwin did a show that actually featured guests who 98 percent of the audience actually recognizes (See: Not Bill De Blasio, Gary Lockwood, Keir Dullea, Cristina Tzintzun, and Mary Brosnahan in the first five weeks of the show alone), it might be succeeding. But the tedious hour has instead produced ratings that have been substantially lower than the cheap and easy repeats of prison documentaries (Lockup), which once occupied the slot. Then there’s the cost of signing Baldwin, hiring producers, writers, other resources…with little return on investment.

This, of course, doesn’t even include the PR nightmare Baldwin predictably brought with him to MSNBC. The actor’s public meltdowns were well-known to Griffin, but he went ahead and signed the 55-year-old anyway. Even worse, he’s allowed Baldwin to dictate the kind of show Up Late would become: One that didn’t leverage Baldwin’s star power, but appeased his ego instead by doing a niche program that belongs on local New York radio, not on a national stage.

Baldwin has been suspended for two weeks for his latest blowup, which was prompted by the host using the colorful combination of “c**ksucking and f*g being directed at a photographer in Manhattan. But who handed down the suspension? That’s only a mystery because Baldwin made the announcement himself, which is patently odd. Who allows anyone to announce their own punishment? And in The Huffington Post, no less? Griffin is nowhere to be found on this story, which only proves he has little control over his talent, especially considering…

…that Martin Bashir still has a job.

It’s a consistent, disturbing theme at MSNBC: Griffin allowing anchors to say just about anything without consequences. Could you imagine if Neil Cavuto or Jake Tapper, who occupy the same timeslot on Fox and CNN, respectively, suggested anyone s*it in anyone’s mouth on national television, as Bashir did last week?

And it’s not as he’s killing it in the ratings. Day after day, Bashir easily owns the lowest-rated show in his timeslot among the big three. If Griffin were smart, he’d use this episode as an excuse to get rid of Bashir. But as of this writing (Sunday evening), nothing has been said or done. No suspensions have been handed down. Maybe Bashir will announce his punishment in Politico…

Is Griffin simply afraid to confront his hosts, or is he more interested in any kind of publicity, good or bad, integrity be damned?

In 2014, things will be better for MSNBC. Elections and all the hype leading up to them are what the network does well, and the midterms will certainly help the self-described place for politics.

Phil Griffin should be commended for helping to create a contrast to Fox News. A network that once had no identity is officially a unique brand.

But 2013 shows that it’s time for the next step at 30 Rock…virtue of a lack of leadership, communication, collaboration, vision and sound decision-making.

Comcast would be wise to make a change.