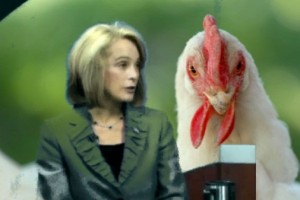 ]Sue Lowden, Senator Harry Reid‘s opponent for US Senator from Nevada, has become the subject of intense mockery for her modest health care proposal, which the Democratic Party has dubbed “Chickens for Checkups.”

On last night’s Countdown, guest host Lawrence O’Donnell introduced a segment on Lowden by saying that she was “advancing a health care system in which you would pay for your checkups, your x-rays, your mammmograms, your kids’ stitches…with chickens. Did I mention I’m not making this up?”

Problem is, that’s clearly not what she said.

Here’s the Countdown segment, in which O’Donnell introduces a brief clip from Nevada Newsmakers on Lowden’s “barter” system:

Lowden never suggests that people should pay for health care with chickens, but rather, references updating that practice from the olden days. While she doesn’t give any examples of a modern-day barter for healthcare, the closest thing I can think of is offering your doctor a sack full of KFC Double-Down sandwiches.

I’m only half-kidding about O’Donnell and Reid being unfair to Lowden, because while her reference to chickens might be irresistibly comical, anyone who watches the clip can see that’s not what she’s saying, and it distracts from the true stupidity and hypocrisy of what she is saying.

Republicans are all about the free market, so Lowden must have a tight grasp on what market forces would encourage doctors to accept less money and/or payment in bartered goods. It’s not supply and demand, though, since doctors control the supply, and Republicans have made it clear that there’s no way to satisfy the demand for health care. There’s no shortage of patients.

No, Lowden’s system depends on doctors being “sympathetic people,” who will essentially take whatever a person is able to pay. You know, each according to his ability, each according to his need. In a background memo, Lowden even extolls the virtues of “public hospital(s), many of which have open-door policies and charge on a sliding scale based on need.”

The premise, then, is that doctors will volunteer to take less money (or KFC) simply because they feel sympathy for their patients. Honestly, a blue-ribbon panel comprised of Michael Moore, Phil Donahue, and Alan Colmes couldn’t come up with a bleeding-heart scheme like that.

In fairness to Lowden, here’s the full clip of that interview segment, in which she correctly notes that the barter system is nowhere on her website. What is there is a less detailed, less comprehensive version of the same health care plan that voters rejected in 2008. She also shows her grasp of the average American’s struggle by suggesting that the real problem is that they just have no place to put that spare $20 grand that they would otherwise use to pay for health care.

You can also check out the full interview at Nevada Newsmakers. Of particular interest is the portion of the interview in which Lowden whines about Harry Reid’s campaign videotaping her appearances, a practice that the host points out is SOP for campaigns, and one which I would think a Republican wouldn’t want to highlight.

As for O’Donnell and the DSCC, most will forgive them the liberties they take with Lowden’s idiocy, but I recall liberals being pretty annoyed when the McCain campaign tried a similar trick with Barack Obama’s remarks about tire pressure. The big difference here is that, while Obama’s underlying point was 100% correct, Lowden doesn’t have a chicken leg to stand on.