‘Cowboy Libertarian’ On Fox: We Need An America Where Anchors Don’t ‘Cavort With Hookers’ 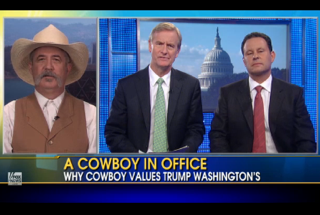 Can America’s problems be solved if only we had more cowboys? “Cowboy Libertarian” radio host Patrick Dorinson joined Fox & Friends hosts Steve Doocy and Brian Kilmeade live today from the cowboy stronghold (?) of San Francisco, where he helped the two distinguish between cowboy and city values, argued in favor of Rick Perry‘s Texas spirit, and decried an America where Eliot Spitzer could host a television show despite “cavorting with hookers.”

There are many reasons why this interview is delightfully bizarre, not the least of which the fact that talking about values from San Francisco usually connotes something having little to do with cattle and crops. But Dorinson was on the program to explains what “cowboy values” were, and why he was afraid America was heading down too urban of a path. “You help a neighbor when you’re in need,” Dorinson explained, “you do your work, you put in an honest day.” Dorinson expressed concern that “we’ve gotten to this point in American politics where when you use the word ‘cowboy,’ it’s a negative, it’s an insult, it’s a pejorative.”

Dorinson also got to evaluate the cowboy statuses of various politicians– George W. Bush is not a cowboy, “but shares out values,” as does Chris Christie, who has “got that same straight talk, he’s not going to BS you.”

Someone who is definitely not a cowboy? Eliot Spitzer, who came up in a bit of a tangent about the national “deficit when it comes to values and ethics.” Dorinson then turned to the TV world for a prime example of how deeply the deterioration of this country’s values have gone: “what happens when a guy like Eliot Spitzer gets a TV show after he’s out cavorting with hookers?” (The answer: the show flounders a bit in the ratings, and is then canceled). Needless to say, Doocy and Kilmeade got a kick out of the remark, which seemed to take them by confusingly pleasant surprise given the context of the conversation.