‘Deport Piers Morgan’ Creator Flips Out On Morgan’s Show: 1776 Will Commence Again If Guns Taken Away 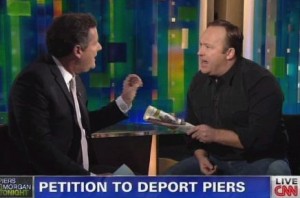 Tonight Piers Morgan sat down with the creator of a White House petition to get him deported from the United States. Alex Jones was fired up throughout the entire interview, launching into a series of loud tirades against Morgan and gun control every few seconds. Every time Morgan tried to ask a question, Jones continued to pile through with his arguments.

Jones said the point of the petition was to bring attention to the fact that United States has a bunch of foreigners bragging about taking away the guns of Americans while the gov’t amasses more weapons for themselves. He said that the Second Amendment isn’t for “duck-hunting,” it’s to protect us from “tyrannical government.” He raised his voice to declare to Morgan, “1776 will commence again if you try to take our firearms!”

Morgan attempted to explain that the United States has significantly more gun murders than England, but Jones dismissed the argument outright. He called England a “police state,” telling Morgan he “fled” to the United States, going so far as to call Morgan a “hatchet man of the New World Order.”

Morgan tried to patiently walk through the finer points of the gun control debate with Jones, but he went on tirade after tirade on an ever-angrier series of tangents. Jones repeatedly criticized Morgan for trying to trip him off with “little factoids” instead of getting to the heart of the gun debate.

Watch part one of the interview below, courtesy of CNN: