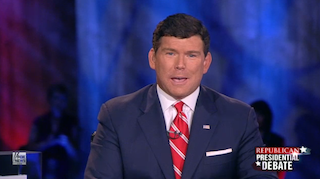 Newt Gingrich may disagree, but the big winner last night seems to be Fox News. While some commenters may not like the idea of the network handling the debates, the consensus from a number of media figures seems to be that the work from Fox and moderators Bret Baier and Chris Wallace was thorough and well done.

Here are some of the comments:

“But the horse race aside, I’ll call the round for Fox. If anyone suspected that the conservative-friendly network would spend the evening lobbing up softballs to the home team, they were mistaken; the panel of Bret Baier, Chris Wallace and guest Byron York spent two hours asking pointed questions, keeping a tight watch on the clock and occasionally getting under the candidates’ skin.”

The Washington Post‘s Chris Cillizza put the moderators in the first column in his list of “Ames presidential debate: Winners and losers” (although he did feel the debate was too long):

“Yes, they — well, Chris Wallace — became part of the debate, which is usually not a good thing. But, Wallace and Bret Baier in particular were willing to pose questions that forced candidates to address their major weakenesses in the race and — perish the thought! — occasionally divert from their talking points. Yes, debates are about the candidates. But, when the candidates are doing everything they can avoid answering any/every question, you need moderators willing to mix it up. And the Fox folks were.”

For The Balitmore Sun, David Zurawik tempered his praise by saying it was “despite” the network’s “conflicts of interest.” Still he entitled his write up “Bret Baier, Chris Wallace make Fox News a winner at Iowa debate”:

“I hate the unprecedented extent to which Fox News has involved itself in Republican politics, but I have to admit the channel presented a first-class, rousing and illuminating debate among GOP candidates Thursday night.

Most of the credit has to go to anchorman Bret Baier and Sunday show host Chris Wallace who were superb in their prepaartion and questions.

We can never lose sight of the way Murdoch and Fox News chief Roger Ailes have abused their place in the media by trying to use the channel to control part of the process of selecting a president of the United States. Such behavior is truly dangerous to our democracy — and they will always find unprincipled characters like Fox analyst and possible candidate Sarah Palin willing to cash their checks.

But for all of that, let’s also be fair to the two Fox journalists (and I don’t use that word lightly) who performed admirably Thursday night in helping voters make more informed choices about the 2012 GOP candidates.”

The backhanded compliments are amusing. What’s really interesting is that some of the strongest criticism is coming from the right. Rush Limbaugh spoke today about his feelings that Fox News was purposefully trying to court “mainstream press.”