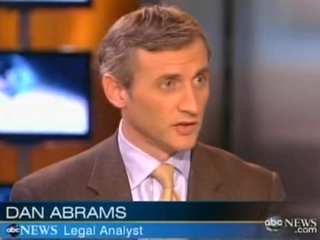 With the legal noose swiftly tightening around former Democratic Vice Presidential candidate John Edwards, it is likely many are having a hard time keeping his woes with the court separate from his manifold moral shortcomings. On ABC’s World News Tonight, George Stephanopoulos and Mediaite founder and ABC legal analyst Dan Abrams discussed how the court will likely sort out the illegal from the immoral, and what money transfers are in dispute.

The charges against Edwards stem directly from behavior associated with his affair with Rielle Hunter, money that may have been used to keep the affair silent. Two of the sources of these funds, Edwards campaign finance chairman Fred Baron and donor Bunny Mellon, are having their donations investigated in particular. Despite the fact that Edwards’ behavior towards his family has mostly been universally reviled, argued Abrams, it takes more than being a bad person to go to jail. Discussing the money, he explained that the intent behind donating said money is what will ultimately determine the case. “If it was clearly intended to further John Edwards’ presidential campaign,” Abrams noted, “he could be in big trouble.” The other possible situation is that the money was clearly intended as a gift, which falls into a different category than a campaign donation legally, or that it was deliberately intended as “an effort to prevent Elizabeth Edwards from finding out about [the affair’],” in which case “that might make him a bad person, but it wouldn’t make it a crime.”