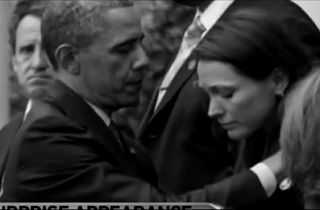 Even as poll after poll shows that obstruction of the Toomey/Manchin background check bill is more poisonous than a dart frog with an attitude, the Republican National Committee has decided to release an ad bragging about it. Political wisdom aside, though, the RNC has crossed a line that should cost them dearly with voters who have any sense of decency. Included in their gloating attack ad was a still frame of President Obama consoling Nicole Hockley, mother of Dylan Hockley, who was six years old when he was murdered at Sandy Hook Elementary School. The shot was taken minutes after the Republicans defeated the bill with a minority of votes.

On Thursday afternoon’s Martin Bashir show, host Martin Bashir played a portion of the ad, and while this disgrace needed Bashir’s outrage if anything ever did, he was struck nearly speechless. “It’s one thing for republicans to celebrate their obstruction of the President’s efforts to prevent children from being massacred by semiautomatic firearms. that’s par for the course. But to feature a grieving mother, whose 6 -year-old has just been murdered?”

There really are no words for how despicable this ad is, because they’re not just rubbing President Obama’s face in it, they’re rubbing Nicole’s, and every other Newtown parent who supported the effort that the Republicans sabotaged. This was an attack ad against them. You betcha, Reince Priebus, you sure showed Nicole Hockley! Pop the cork, and drink the delicious tears. You earned them.

But the next time you tell the Newtown parents to go to Hell, in word or in deed, keep in mind that there’s a special place there for politicians who won’t do the right thing, and an even hotter one for those who brag about it. We’ll see how average Americans react to this soon enough.

Here’s the clip, from Martin Bashir, mostly because I don’t want the RNC to get even one more click out of this: