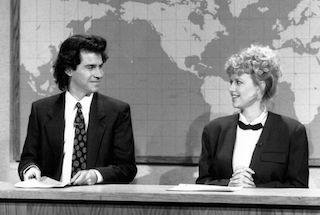 Saturday Night Live’s 40th anniversary special reunited nearly every living former cast member Sunday night, but there were some exceptions. As some viewers on Twitter pointed out, a couple of cast members who evolved over the years into outspoken conservatives seemed to be missing entirely, including Dennis Miller and Victoria Jackson. But were they really snubbed by the show as some suggested?

Miller, who has become a regular on Fox News’ The O’Reilly Factor, did appear in a montage of Weekend Update clips, but he did not show up in person. Appearing on Bill Simmons’ podcast Wednesday, fellow former Update anchor Seth Meyers named Miller as the one person he really wished could have made it. But as Lorne Michaels has said from the beginning, everyone was invited to participate.

Miller confirmed as much on Twitter today, without giving an explanation for why he chose not to show up:

Lorne Michaels is one of the classier, well-mannered men I've ever met. When he says EVERYONE was invited, everyone was invited. #snl40

As for Jackson, who recently ran and lost a local campaign in Tennessee on a tea party platform, she penned an extended blog post Monday explaining that she was at the show, but complaining that she was put in overflow viewing room and not in the main studio audience. “Is Lorne ashamed of me?” she asked.

“I was the only cast member put in the overflow room,” Jackson said in a radio interview with Rusty Humphries on Wednesday. But according to The Hollywood Reporter, she was only put there because she told the producers she might be late and they did not want her disrupting the live show.

Jackson speculated that she was banished to the overflow room and not included in any of the live sketches because of her past comments about the gay-themed storylines on Glee making a “mockery” of Christians. “The only thing I can think of is the gay thing, because it’s such a strong movement,” she said. “Maybe Lorne was like, ‘where do we sit Victoria?’”

Of course, there is one more right-leaning voice from Miller and Jackson’s SNL generation: Jon Lovitz. He managed to get one of the biggest laughs of the night by reacting to his untimely inclusion in the otherwise somber “In Memoriam” segment.