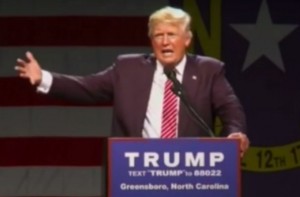 Donald Trump tonight made a comment that sounded an awful lot like he was accusing U.S. soldiers of embezzling money…

Trump went on a riff at his North Carolina rally tonight about Iraq, saying, “How about bringing baskets of money, millions and millions of dollars, and handing it out.”

It would appear there Trump is referring to the Iraqi reconstruction funds the U.S. funneled into Iraq. He continued, “I want to know who were the soldiers that had that job, ’cause I think they’re living well right now, whoever they may be.”

Now, it was famously reported back then that a lot of the money meant for Iraq reconstruction went missing and a lot of it got misspent, but Trump is making the specific accusation that U.S. soldiers took that money and are now “living well” off it.

And in case there’s any lingering doubts as to what he could have meant there, behold this Guardian report on something Trump said back in the fall:

He also suggested that some American soldiers charged with distributing money to fund the Afghan and Iraqi government embezzled it instead. “I want to know who are the soldiers carrying suitcases with $50m?” asked Trump. “How stupid are we? I wouldn’t be surprised if those soldiers, if the cash didn’t get there.”

You can watch his comments tonight above, via MSNBC.

UPDATE –– 10:04 pm EST: A Trump spokesperson says he was referring to Iraqi soldiers: