Disappointed Sarah Palin To Greta: ‘I Cannot Believe That The Majority Of Americans’ Would Support Obama
video

Disappointed Sarah Palin To Greta: ‘I Cannot Believe That The Majority Of Americans’ Would Support Obama 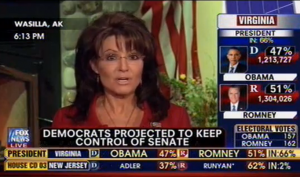 Sarah Palin spoke to Greta Van Susteren and other Fox Newsers covering the election, offering her take on the results in the earlier part of the night. Not sounding particularly hopeful about Mitt Romney‘s prospects, Palin focused her attention on the bleak implications of the president’s re-election.

While Palin noted that we’re still waiting on Ohio, she said she was “disappointed” in some of the results thus far.

“The realization at this point is that those Bain Capital ads that voters just got inundated with early on in Ohio, and some of these other areas as it pertained to the auto bailout, I think really hurt Romney.”

“This really is a catastrophic set back to our economy,” Palin said. “And to any opportunity that we would have for Supreme Court justices to be appointed who” who strictly adhere to the Constitution.

Emphasizing Obama’s record on debt, she said four more years simply means a bigger deficit. Van Susteren chimed in that even if Florida, Virginia and Ohio go to Romney, it is evident there’s “no clear mandate from the American people.” The “country remains divided.”

Pointing again to the debt, Palin said the way the country moves forward is by following the “blueprint” from the Constitution.

As for how the rest of the night will go, she said that after asking voters for their “sacred trust,” which is their vote, there’s “nothing else to do.” We have to let things unfold.

Van Susteren reiterated her point about there being no clear mandate, no commanding lead by one party.

“A win is a win,” Palin said, adding that she “cannot believe that the majority of Americans” would feel okay with incurring more debt, not balancing the budget and and relying on foreign energy.

“It’s a perplexing time for many of us right now,” she noted, “if things continue in this trend that we have seen earlier tonight.”