Trump: If Republicans ‘Pick A Loser, I May Run As An Independent’ 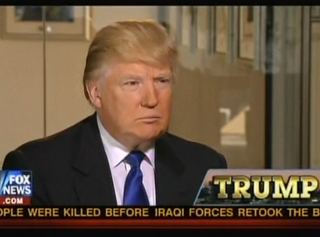 Here we go again: Donald Trump has been hinting for some time that, now that he has given up on the Republican nomination, he may rear his curiously-coiffed head in the general election as an independent candidate. But on tonight’s Hannity he solidified his disillusion with the Republicans and definitively declared that, yes, “if they pick a loser, I may run as an independent.”

Trump didn’t seem too impressed with last night’s debate, telling Sean Hannity that he’d “love for the Republicans to choose somebody who’s great,” but didn’t see them doing so well. While he did note that “Rep. Michele Bachmann looked very good” and that “Tim Pawlenty is a nice guy,” but botched the Mitt Romney question. He also noted that he had no idea whether Sarah Palin was running, but that “she hasn’t asked me [to support her] and we have a very good relationship.”

Ultimately, Trump admitted, he didn’t run because “having a hit show is cool,” and he couldn’t be both the host of The Apprentice and a presidential candidate. That said, there was still a year and a half between him and the elections, and “if [the Republicans] pick a loser, I may run as an independent.” Ultimately, it would depend on whether he disapproved of the Republican candidate and whether “the economy continues to do badly,” but Trump made it clear that, this time, he’s serious. Which means only one thing: ball’s in your court, Lawrence O’Donnell.