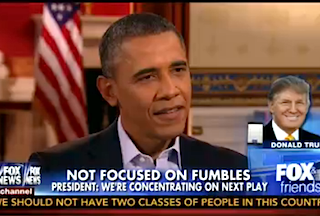 It’s the Monday morning after the Super Bowl, which could only mean it was time for Donald Trump to Monday morning quarterback Bill O’Reilly’s pre-game interview with President Barack Obama on his weekly Fox & Friends phone call. Rather than spend too much time critiquing O’Reilly’s interview style, Trump focused in on Obama’s decision not to wear a tie, calling it “sloppy” and “not presidential.”

“I thought that Bill O’Reilly was great,” Trump said. “I thought he set the right tone. He was tough, but he was really very fair and bringing up really important points,” mentioning both Obamacare and Benghazi. Moving onto Obama, Trump said, “I definitely think he should have worn a tie, you know?”

“It’s sloppy. It’s not appropriate. It’s not presidential,” Trump continued. “He’s the president of the United States. Let him put on a tie.”

The rest of the interview was spent parsing Obama’s answers on Benghazi but Trump returned to his central point at the end. When host Steve Doocy reminded Trump that one of his many companies makes ties and could send Obama a couple of them, he said, “That’s a great idea, you just gave me a great idea right out of Macy’s. I’ll send them immediately.”

“But I do mean that and that has nothing to do with my ties,” he said. “That has to do with the fact that he’s the president and in my opinion, that’s what he should be doing.”

And watch O’Reilly’s full interview with Obama below, via Fox, in case you missed it: