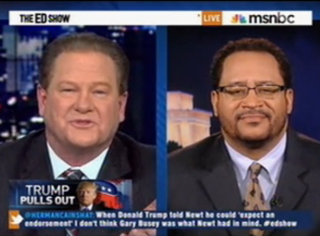 The surreal dream of a Republican presidential debate moderated by Donald Trump ended today, as the potential presidential contender and moderator himself argued that he would not give up his right to run in order to moderate. On tonight’s Ed Show, host Ed Schultz and Prof. Michael Eric Dyson bade the “Donald Duck Show” goodbye, with Schultz particularly glad that Trump has never been a guest on his show.

RELATED: Donald Trump Bows Out Of Debate: ‘I’m Not Willing To Give Up My Right To Run’

Schultz noted that he thought Trump’s claims that he would be a fair moderator were “garbage,” and was happy to see the debate idea go. Dyson agreed, adding that Trump was an “unmitigated narcissist” and that the event would not be “a debate, it’s a rebate” (?). He expressed particular frustration about Trump “perpetuating this lie that he’s a serious candidate.”

Telling to Trump also was the idea that Republican candidates seemed uncomfortable at a venue with Trump because of his tendency to be a loose cannon and shoot off with embarrassing ideas that could reflect badly on them. Schultz called him an “unguided missile” who “doesn’t have to answer to any standards or practices that many in this industry have to answer to and follow,” with which Dyson agreed. Dyson added that this was particularly telling of Trump– “that’s saying a lot when you’re talking about Rick Perry and Newt Gingrich who fly off at the lip at a moment’s notice.”

Dyson continued, arguing that the debate would be a “Donald Duck show” in which Trump would be “trying to browbeat them and coerce them by any means necessary into this fabricated debate,” only to later say something that would embarrass them all. “I am so glad that man has never been on The Ed Show,” Schultz admitted, calling Trump a “total loser, all-American zero” who “doesn’t have the guts to run.” Dyson corroborated the cowardice attack, saying the reason he has not been on The Ed Show was that he was “afraid.”