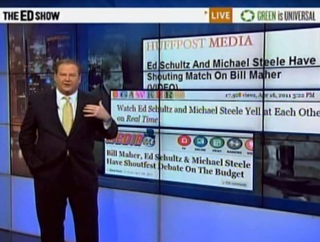 Last Friday, Ed Schultz took his show on the road to visit Bill Maher‘s Real Time, and the volume on set as he faced off against former RNC chairman Michael Steele got, of course, predictably loud. Today on his program, Schultz rebutted the blogosphere (including your humble Mediaite) for accurately chronicling said volume, not denying it, but asking his audience, “What do you want me to do?”

Schultz cited several sites that identified the debate between Steele and himself as loud, not particularly annoyed but not particularly pleased, either. “How can you not get cranked up if you believe in the institutions that make this country great?” he asked, before showing the clip he claimed most websites missed— that of Steele admitting he was not sure how the current health care system would take care of a certain portion of the elderly without the policies implemented by last year’s universal health care bill. “What do you say we just wing it with this health care thing?” Schultz mocked. He added, “I don’t care what any website has to say,” and advised his viewers that, as liberals, they should be unafraid of the “shouty” characterization. He also teased that Steele had scheduled an appearance on the program on Thursday, and concluded an extensive assessment of the health care system as it stands in anticipation of the debate with a message: “We as liberals in this country have to realize that it’s not hard to stand up to the Michael Steeles of the world.”