Ed Schultz: ‘Fox News Continues To Set The Record For The Most Ridiculous Things Ever Said On Television’ 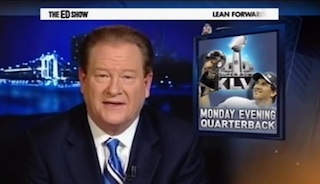 Yesterday on The Five, Dana Perino made the bizarre claim that M.I.A. wasn’t American enough to perform in the Super Bowl Halftime Show unlike such American luminaries as, I guess, The Who, The Rolling Stones, and Madonna’s accent. Obviously, Perino’s allegation was borderline laughable and easy to make fun of (seriously, if I didn’t have to leave the office early yesterday, Frances never would have gotten a chance at this post), so you know what that means; set the timer for a rival cable network to mock it. And…take it away Ed Schultz!

RELATED: Dana Perino Outraged That M.I.A., ‘Not Even An American,’ Performed At Super Bowl

Yep, only three hours later, Schultz had a run down on the big game and, after taking on Gisele Bundchen’s potty mouth and Rush Limbaugh’s NoseGate 2012, Schultz went after Perino and her channel:

“So, according to Dana Perino, you can`t deliver a message about world peace unless you`re an American. The super bowl set a new record for viewership, Fox News continues to set the record for the most
ridiculous things ever said on television.”